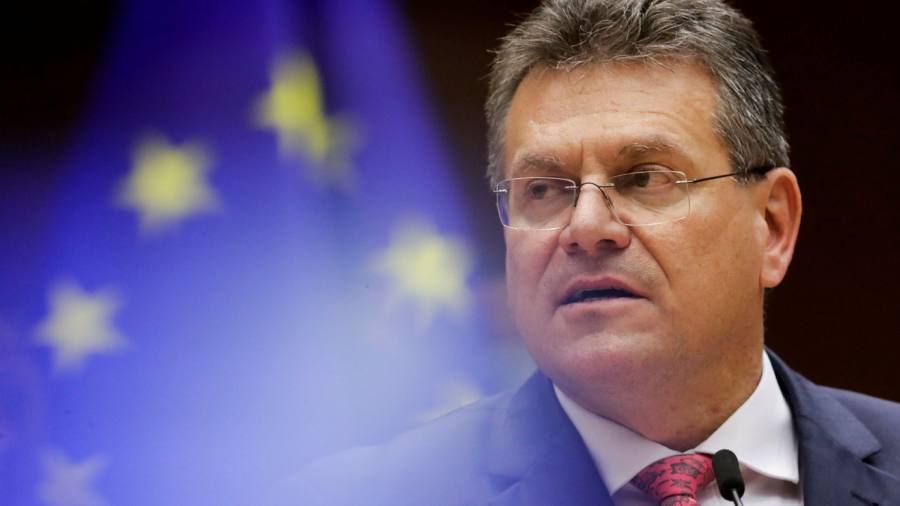 The EU’s Brexit chief has said he is convinced solutions can be found to “minimise” the disruption of Brexit on Northern Ireland, calling for a “good faith” approach to applying new trading rules in a way that can reduce tensions.

Maros Sefcovic, the EU commission vice-president in charge of Brexit, told the FT he believed discussions with the UK could yield approaches that protect the EU market from illicit entry of goods and reduce problems for people and businesses in Northern Ireland — although he also stressed there needed “to be an effort from both sides”.

Following a recent resurgence of unrest and violence in the region, Britain and the EU agreed last week to intensify talks on the implementation of the Northern Ireland protocol — part of the 2019 Brexit treaty that created a trade frontier in the Irish Sea to ensure all goods flowing from Great Britain into Northern Ireland comply with the bloc’s rules.

Speaking to the FT on Friday after a Thursday dinner with his UK counterpart David Frost, Sefcovic said that the EU would never be able to tolerate any “risk to the integrity of the single market” that could arise if controls were not properly enforced. But he said these conditions left scope for discussions on practical solutions.

“It’s not easy to do, it’s a massive, massive task,” he said, noting that the talks with the UK cover more than 20 topics. “But what we need is the good faith approach and the proper implementation of all the commitments [already] undertaken, so we see the system working, and then we can look at the risks which are associated with different measures being applied,” he said.

“We also ask our UK colleagues to tell us how [they] want to minimise the risk,” he said.

Speaking on Sunday, Ireland’s taoiseach Micheál Martin said he “sincerely” believed the protocol was a “fair conclusion to attempts to limit the potential destructiveness of Brexit on this island”.

“It is complex, but it is nowhere near as complex as it is presented,” he said, stressing that “important progress” has been made in recent days as Ireland, the UK and the EU worked on “how to tone down the disputes and show how the arrangements for Northern Ireland can work. With openness and good faith, we can deal with this difficult period.”

The Irish leader warned that “very serious harm can come if we keep seeing people trying to use Brexit as an issue to create points of dispute or . . . presenting every single issue as a zero-sum, win-lose fight”.

Sefcovic praised what he said was “very professional co-operation” by UK and EU officials in Northern Ireland and said relations between London and Brussels were mending after a spat over the protocol last month, when Britain blindsided Brussels by unilaterally extending waivers from some of the protocol’s rules — a move that led Brussels to launch legal action.

Sefcovic recalled that he and Frost knew each other from mid-2000s, when Frost was a UK civil servant working on negotiations on the EU budget, and the Slovak politician was his country’s ambassador to the EU.

Noting that they have exchanged numbers so as to have a “hotline” to avoid disputes, Sefcovic said: “I think we have now our personal relationship established at the level that we can really call each other at any time of the day or night, and simply have that respect for each other that we will do our utmost not to surprise each other.”

Asked if he felt the EU was getting “good faith” implementation from the UK, he said both sides had agreed to look for joint solutions. “Definitely from my side I will do my utmost . . . and I believe that they will do the same.”

Pressed on what could be done to reduce disruption to trade, Sefcovic said: “We can make the checks smoother, faster, we can do a lot through the IT systems, and of course there are other means how this can be done.”

Sefcovic repeated the EU position on one step that would reduce trade frictions would be for the UK to commit to align with the EU’s animal health and food safety standards. Such a step has been ruled out by the British government for sovereignty reasons, although UK officials have signalled that the country would be interested in negotiating a veterinary agreement along the lines of the one the EU has with New Zealand where each side recognises each other’s standards.