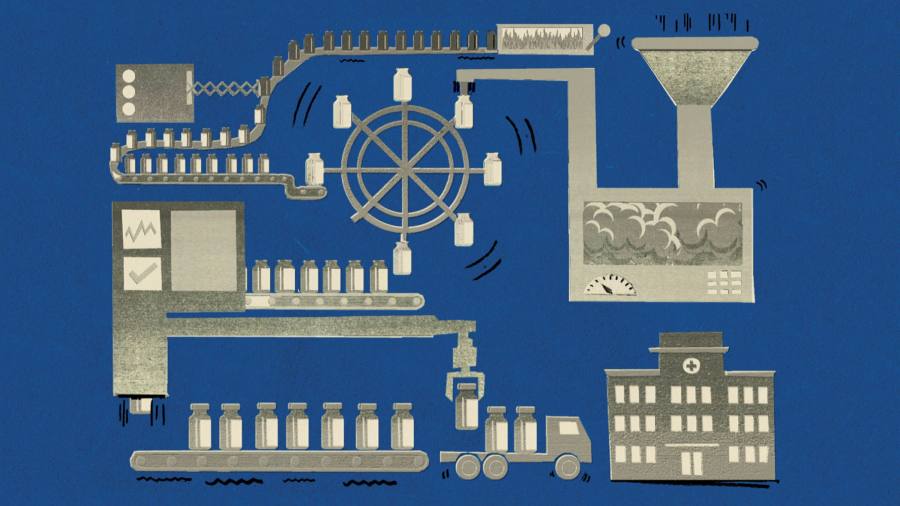 If you want something done right, do it yourself. Johnson & Johnson put that adage into practice over the weekend, as it took over a supplier’s factory that makes a key ingredient for its coronavirus vaccine.

The American drugmaker said it was “assuming full responsibility” for the Baltimore plant and would be adding specialists in “manufacturing, quality and technical operations”. J&J had good reason to elbow aside Emergent BioSolutions. Workers had spoiled 15m doses of J&J’s vaccine by accidentally mixing its ingredients with those for the Oxford/AstraZeneca jab.

The action comes at a time when other companies are also moving towards vertical integration to give them control over everything from raw materials to interaction with retail customers. Once dismissed as outdated, the strategy is getting a fresh look amid shortages of key parts and materials, and pressure on companies to act as good corporate citizens.

The 19th-century steel magnate Andrew Carnegie helped pioneer industrial vertical integration. He built steel mills, then purchased coke fields and iron ore deposits and the railroads and ships needed to supply them. It made him one of the world’s richest men.

But doing everything in-house is capital intensive and requires wide-ranging expertise. More recently, global companies have sought cheaper raw materials and labour abroad, and relied on local partners. Cost-conscious executives saw advantages to outsourcing parts of the production process. Specialist suppliers developed efficiencies, orders could be increased or shrunk on demand and, unlike employees, suppliers did not have to be paid immediately, effectively providing a form of short-term financing. The world’s largest companies have thousands of suppliers: Airbus says it works with more than 12,000; Nestlé says it has 165,000.

Pioneering companies often opt for vertical integration to give them a sustainable edge. Electric carmaker Tesla produces most of its parts in-house. Its giant Nevada gigafactory gives it capacity to grow even as competitors struggle to source enough batteries. Amazon built outward from online book sales into logistics and cloud services. But a vertical structure has also helped Ukrainian poultry group MHP achieve higher margins than UK rival Boparan.

Now a squeeze on computer microchips, which has hobbled the car industry, and shortages of medical equipment and vaccine ingredients, have led other groups to rethink. Many are reconsidering supply chains that relied heavily on one country or region to reduce their vulnerability to shipping bottlenecks, geopolitics and disease.

Further pressure comes from activists and a new law in Germany which seeks to hold companies responsible for human rights and sustainability in their supply chains. Nike and H&M, among others, have been caught between western demands that they criticise forced labour in Xinjiang and Chinese boycotts over those statements.

Meanwhile, many companies are insisting on “virtual integration”, often relying on technology to share information about suppliers’ work processes and inventories. This has led some companies to cut ties with suppliers who fail to provide the necessary transparency. The UK’s Boohoo did so last month after coming under fire for alleged mistreatment of garment workers.

In key areas, some groups opt to set up joint ventures, as General Motors did with LG Energy Solutions to build a $2.3bn battery plant in Ohio. More innovative companies go further: Amazon Web Services is designing customised chips, and Tesla has said the company will not just design and build batteries but emulate Carnegie by buying and processing raw lithium.

To make vertical integration work, companies should focus on areas with significant intellectual property where suppliers are hard to find. “The places where you have the most risk are capacity constrained for the whole market and not substitutable. If you make dog food, you might think dogs prefer chicken but you can use pork. But you can’t make an electric car without a battery,” says Daniel Swan, who heads McKinsey’s supply chain work.

The advantages of tighter integration need to be weighed against the capital cost, the challenge of operating a different kind of company and the potential for legal trouble. This is particularly true when the supplier involved has other customers — and most do. “Companies considering buying a supplier should be asked: ‘Do you have the expertise to sell what they sell and would your competitors be willing to buy from a supplier owned by you?’” says Bindiya Vakil, head of Resilinc, a supply chain intelligence group.

Last week, the US Federal Trade Commission sued to block biotech group Illumina’s $7bn purchase of cancer screening start-up Grail. Grail, which was founded by the larger company, uses genetic sequencing machines made by Illumina, but so do other companies. The FTC argues that full ownership could tempt Illumina to raise prices for Grail’s rivals or starve them of supplies.

J&J does not have these problems in Baltimore. It took over the plant at the request of the US government, which also insisted that AstraZeneca move its manufacturing to another plant to avoid future contamination risks. Other companies will have to tread more carefully. Still, the rewards for selective integration could be substantial.