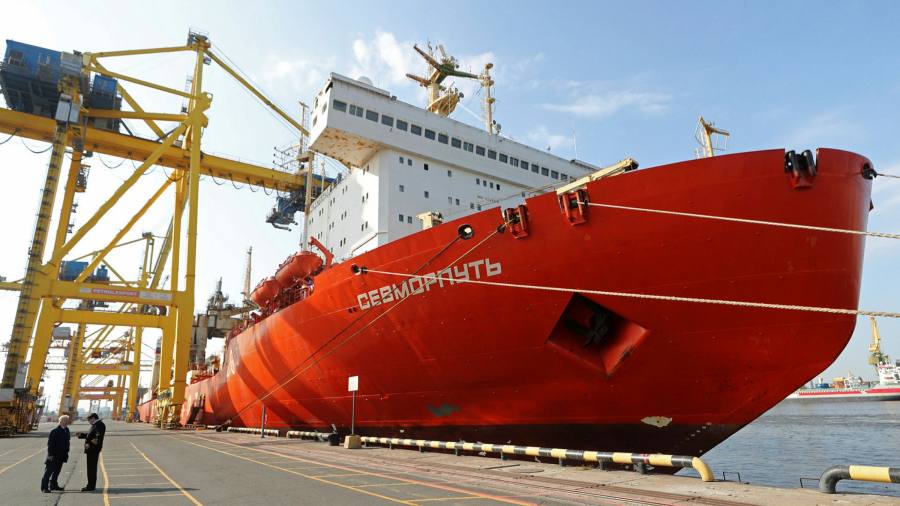 As hundreds of ships and tankers were held up in the Suez Canal, Russia has been reminding Europe of the benefits of unblockable pipelines and the long-term opportunities of the alternative northern sea route to Asia along its Arctic coast, where the width and depth of vessels are not in question.

The northern sea route shipped 33m tonnes of cargo last year, while the Suez Canal, unblocked on Monday after a week of disruption, transports more than 3m tonnes of cargo daily. But given rising trade volumes, the emergence of additional short routes for cargo delivery is inevitable, Russia’s energy ministry said.

“The northern sea route . . . has high potential in expanding the cargo transportation volume, allowing to significantly cut the duration of goods transportation from Asia to Europe,” it said.

Even though year-round navigation is not expected until 2025-2030 and climate risks remain, Rosatom, Russia’s state nuclear corporation and the body in charge of the northern sea route, expects a rise in demand for the route after the Suez incident.

“The northern sea route’s development hedges logistical risks and makes global trade more sustainable. Undoubtedly, such Asian countries as China, Japan, and South Korea will take the precedent of the Suez Canal’s blockage into consideration in their long-term strategic plans,” said Vladimir Panov, a special representative for Arctic development at Rosatom, according to Interfax news agency.

“The situation is positive for Russian companies and economy for a number of reasons. That includes the fact that in the long run, the current circumstances serve as a heavy argument in favour of using the northern sea route as an alternative to the Suez Canal,” said Anna Butko, an oil and gas analyst at Aton, a Moscow brokerage.

“Russia’s unique geographical position gives it the natural advantage in the energy market as far as access to key consumer markets goes, as well as the speed of delivery of energy supplies,” the energy ministry said, praising its extensive oil and gas pipelines network to Europe, Turkey and China for reliability and competitive costs.

As for oil, not only did the Suez blockage have no significant effect on Russia’s exports because the canal is not the main route for them, it may add upward pressure on Moscow’s benchmark Urals blend’s price, as well as that of spot gas prices in Europe, Butko said.

The gas market offers an even greater upside. While Qatar, one of the world’s largest liquefied natural gas producers, sending on average five LNG cargoes to Europe via the Suez Canal each week, has 500,000 tonnes stuck in the Gulf of Suez, Russia can easily make up for gas volumes Europe may need to replenish the low underground stock levels, according to Rystad Energy consultancy.

“Given that Russian pipeline supplies to Europe are currently below maximum capacity, Russian supplies could help provide some flexibility,” Carlos Torres Diaz, head of gas and power markets at Rystad, said in a note.

“Looking at who benefits most from the current situation, Russia is definitely the country not in a hurry to see the blockade resolved,” he added.

The Suez blockage could also serve as a trump card for Russia’s Nord Stream-2 gas pipeline. The controversial project that would carry gas directly from Russia to Europe avoiding Ukraine has been delayed for two years under strong US pressure.

However, Russia has been affected to some degree by the Suez blockage. There are 2.5m barrels of Russian oil waiting to resume their journey via the canal to customers in Asia. Several empty LNG tankers used by Novatek, Russia’s largest LNG producer, are also stuck on their return.

But in the long run, Moscow is banking on shipping companies and energy buyers turning to Russia for alternatives. “The current force majeure confirms the repeatedly proven fact that diversification and the existence of many alternatives is positive for the global economy,” Butko said.