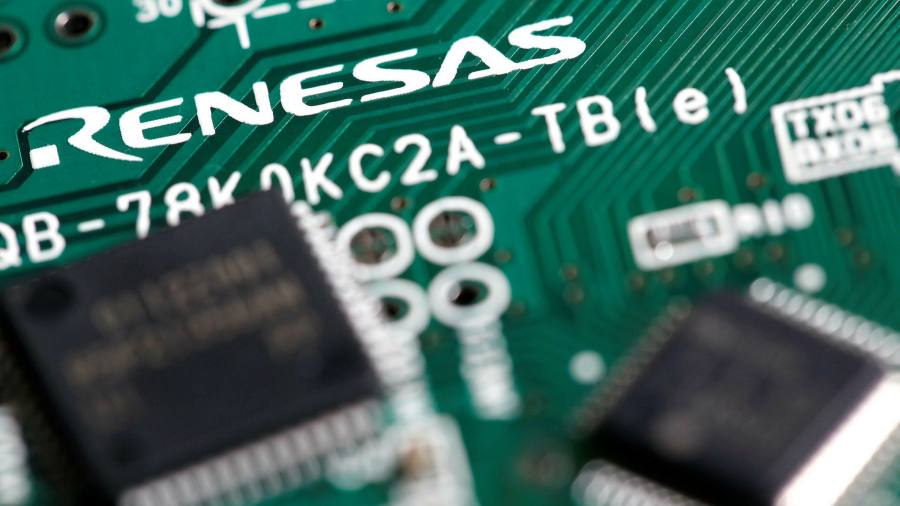 Two days after a fire broke out at a Renesas Electronics plant this month that threatened to deepen the global chip drought, the Japanese group stressed it would push ahead with its €4.9bn acquisition of Apple supplier Dialog.

The message was largely lost in the aftermath of an accident that invoked memories of the 2011 earthquake and tsunami when the same chip factory in north-eastern Japan was heavily damaged, halting the production of cars as far afield as the US.

But the supply chain crisis triggered by the Covid-19 pandemic, the cold blast in the US and most recently by the Suez Canal blockage have strengthened the reasons why Renesas is splurging $16bn to become bigger and more international, with three acquisitions since 2017.

“There is increasing danger to be heavily reliant on a single market, product or application,” Hidetoshi Shibata, chief executive of Renesas, said in an interview two weeks before the fire occurred.

The pandemic has accelerated rivalry between the US and China for supremacy in semiconductor technology as strains in supply chains exposed the reliance of both economies on advanced chip capability held by Taiwan Semiconductor Manufacturing Company. TSMC, the world’s largest contract chipmaker, manufactures roughly 70 per cent of the microcontroller chips used in cars, according to IHS Markit.

The US-China dispute has forced Renesas, which generates about 23 per cent of its sales in China, to navigate a tricky business environment as Washington imposed sanctions against Huawei and other Chinese technology groups.

One way to navigate such geopolitical risks, Shibata says, is to avoid directly competing with the cash-armed Chinese rivals and to have enough flexibility in the business so it can survive even if Renesas is suddenly cut off from one of its markets due to a decoupling of the economies.

As part of its diversification strategy, the company bought US rival Integrated Device Technology for $7.2bn in 2019, on the heels of the $3.2bn purchase of US chipmaker Intersil in 2017.

The acquisition of Dialog, the Anglo-German semiconductor specialist, would further broaden its footprint beyond automotive chips — where it now generates half of its revenue — and increase its presence in internet-connected devices.

The transition is a long time in coming. A year after the 2011 Tohoku earthquake and tsunami disaster, a government-backed fund partnered with Panasonic and Toyota to rescue struggling Renesas from falling into the hands of US private equity group KKR.

At the time, the state-backed Innovation Network Corporation of Japan touted the deal as a way to restore “the international competitiveness” of the country’s ailing semiconductor industry, which lost out against Taiwanese and South Korean rivals.

But internationalisation proved difficult for the national champion created in 2010 through a government-orchestrated merger of the chip units of Hitachi, Mitsubishi Electric and NEC. Critics say backing from Toyota, its biggest automotive customer, made it difficult for the group to seek increases in chip prices and expand aggressively beyond application in cars.

The company also has suffered management turbulence, with three chief executives replaced since the INCJ became the biggest shareholder. However, the stock market assessment of Renesas has finally improved as its strategy has become more consistent and transparent under Shibata, the Harvard-educated former Merrill Lynch banker who joined from INCJ. That, along with the chip shortage, has boosted shares in Renesas by 125 per cent since he became the fourth chief executive in July of 2019.

Today, Renesas is the world’s second-largest supplier of microcontroller chips that are used in vehicles to power everything from power steering to wipers. As boundaries between the tech and car industries start to disappear in the era of electric vehicles, however, Renesas’s acquisition strategy will be tested by whether the company is successful in supplying chips to both worlds.

Shibata says the first critical step will be integration of the acquired companies with its domestic units, a challenge that has crippled many overseas deals by Japanese businesses. “It’s going to take a very long time to unify a fragmented culture. We’re only at the start of a climb,” he says.