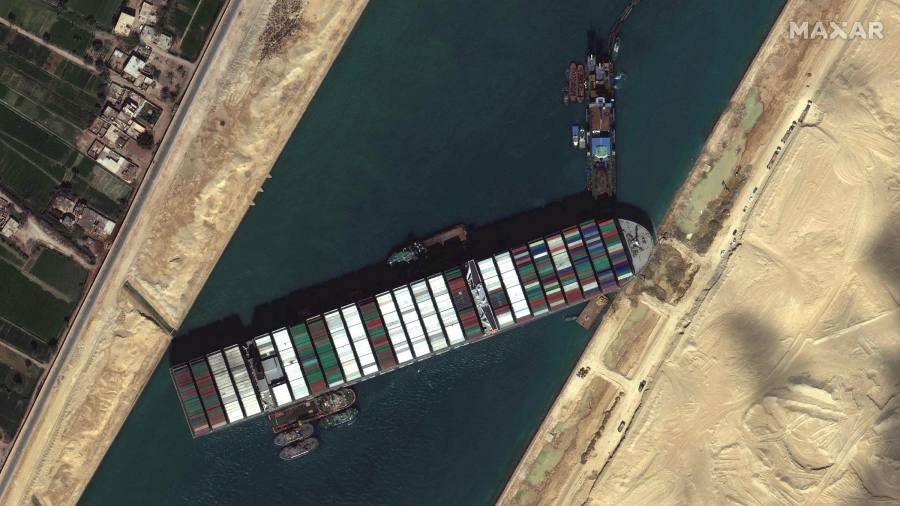 The head of the Suez Canal Authority has warned that there is no timeline for freeing the 220,000-tonne container ship that has blocked one of the main arteries of global trade, with efforts likely to shift to unloading its cargo if it cannot be refloated in the coming days.

Efforts to free the Ever Given were continuing on Saturday, with salvage experts deploying high-powered dredgers and tugboats, but Osama Rabie, who heads the authority, said they might have to resort to what he called “plan C” — removing at least some of the thousands of containers onboard.

Shipping and salvage experts have warned that moving to unload the containers from the vessel would probably delay the reopening of the canal by weeks, causing severe disruption to supply chains for everything from automobile parts and commodities such as crude oil to children’s toys.

Late on Saturday, Leth Agencies, a transit agent at the Suez Canal, said that efforts to free the ship that evening had failed, adding “tidal conditions didn’t help refloating Ever Given tonight”.

Around 12 per cent of all seaborne trade passes through the Suez Canal, which is the fastest route from Europe to Asia. Dozens of container ships and oil tankers have already started to reroute around Africa, a route that will add more than a week to journey times, and some vessels have been ordered to discharge cargo at nearby ports.

Rabie said there was some hope on Friday as the vessel, which is lodged diagonally across the two banks of the canal, showed some signs of “responding” to dredging efforts and the multiple tugboats that have been deployed to try and drag it free. The stern and rudder had moved, he said.

But he added that low tides had thwarted the latest efforts.

The White House on Friday said the US was offering assistance to Egyptian authorities to help free the vessel, in a sign that concerns over the canal’s closure has reached the highest levels of government internationally.

But it is not clear what additional assistance the US could provide, with international salvage companies already in Egypt.

The logistics of unloading 40-foot containers, which can weigh about 30 tonnes when full, from an almost 60m-height are far from straightforward, with the accident happening far from any port infrastructure.

Peter Berdowski, chief executive of Boskalis — which owns Smit Salvage that has been working to free the ship — said late on Friday that he was still hopeful the ship could be freed at the start of next week “but everything will have to work out exactly right for that”.

“The bow is really stuck in the sandy clay, but the stern has not been pushed totally into the clay, which is positive,” Berdowski told Dutch TV programme Nieuwsuur on Friday, according to Reuters.

He added that more heavy tugboats were due to arrive this weekend.

“We hope that a combination of the tugboats, dredging of sand at the bow and a high tide will enable us to get the ship loose,” Berdowski said.

Mediterranean Shipping Company, the world’s second-largest shipping group, said on Saturday the world was facing “one of the biggest disruptions to global trade in recent years” and warned that customers should expect a “deterioration in supply chain reliability issues over the coming months” even if the canal could be unblocked quickly.

“Sailing around the Cape of Good Hope is an option on some routes, while in other cases it’s more about working closely with our customers to see what other solutions we can devise,” said Caroline Becquart, MSC’s senior vice-president.

“Unfortunately, even when the canal reopens for the huge backlog of ships waiting at anchorage this will lead to a surge in arrivals at certain ports and we may experience fresh congestion problems.”

Rabie said that the number of ships waiting to transit the canal had swelled to around 320.

Lloyd’s List estimates that more than $10bn a day of goods have been delayed at the north and south entrances to the canal since the Ever Given became stuck on Tuesday.

Rabie said Egypt was losing up to $14m a day in canal fees.