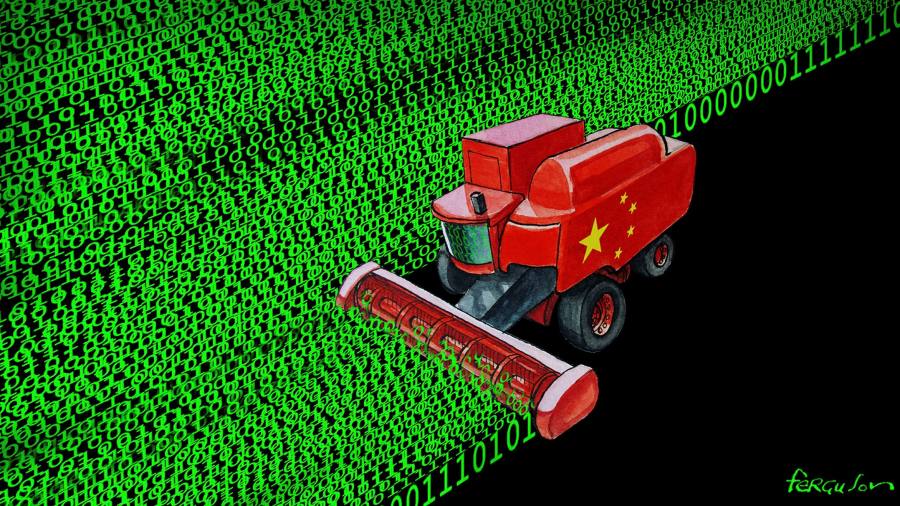 Much of the future of espionage, according to Jeremy Fleming, head of the UK spy agency GCHQ, lies in artificial intelligence. In a world in which most people live within reach of a mobile phone signal and many objects are connected through the internet of things, the wealth of information available to analysts who can access the digital world is impressive.

This, sadly, will do more than sound a death knell for James Bond and his gadgetry. There will be little use for an invisible car or a dart gun attached to your wrist when secrets can be more easily extracted through the invisible agency of an algorithm.

It is also casting suspicion across the global trade and investment in technology, particularly with China. Much of global trade is digital and it is often as unclear to governments as it is to consumers how the data collected from everyday devices is used by big tech companies and interested authorities.

Some see a future in which the use of technology, and the data it collects, is balkanised between strategic allies and adversaries. If this vision is realised, it would signal the demise of the techno-globalism that has underpinned international technology co-operation since the cold war ended in the early 1990s.

“The world is definitely moving towards a type of technology bifurcation and this bifurcation will be more obvious in critical, strategic and military technology areas,” says Danielle Cave, deputy director of the international cyber policy centre at ASPI, an Australian think-tank.

“The bifurcation is likely to be messy. We won’t always see a straight line that divides countries or technologies into two clear and obvious camps,” Cave added. “Major powers like the US and China, which are not just strategic competitors but, importantly, also intelligence adversaries, will be the key architects of how this new world pans out.”

Several events in recent weeks show the tensions at play. In the UK, intelligence agencies are pushing for new curbs on local authorities’ use of Chinese “smart cities” technology over concerns Beijing could use it for espionage, surveillance or collection of sensitive data. Such technology includes surveillance cameras and systems enabling traffic management and energy supply.

In Japan, the government is scaling back its use of a popular messaging app, Line, after its operator acknowledged that employees of an affiliate in China had been able to view Japanese users’ personal information. The data included names, phone numbers, identification numbers and some messages.

China’s concerns over data security have also come to the fore. Elon Musk, Tesla chief executive, denied last week that his company’s cars could be used to spy following reports that the Chinese military has banned Teslas from its facilities. Musk told a prominent Chinese forum that the company had a strong incentive for confidentiality. “If Tesla used cars to spy in China or anywhere, we will get shut down.”

The problem for Musk is that it is hard to prove a negative in cyber space. Huawei, the Chinese telecoms equipment giant, found this when it fought suspicion in the UK and elsewhere that its 5G telecoms infrastructure could host “back doors” to facilitate cyber snooping. The UK last year initiated a programme to remove Huawei equipment from its 5G networks.

Another affront to trust is that promises made in earnest today can become false tomorrow. For example, Apple is expected in the coming weeks to roll out changes to its iPhones to give users more assurance on privacy. But some of China’s biggest technology companies, including ByteDance and Tencent, are testing a tool to bypass Apple’s new privacy rules and continue tracking iPhone users without their consent.

The intensified scrutiny being directed at Chinese companies in the west, and western companies in China, comes as China moves to the forefront of global innovation after centuries of catch-up. Data from the European Patent Office shows that patent awards to Chinese companies rose by 10 per cent in 2020, faster than in any other large economy. On its current trajectory, China could challenge Germany and Japan to rank second to the US in seven years in terms of annual patent applications to the EPO.

A similar dynamic is under way at the World Intellectual Property Organization, a UN agency, where Huawei is the leading corporate applicant for patents and two-thirds of applications came from Asian companies last year. But most of the patents that Chinese companies are winning are for technologies that are, to some degree at least, reliant on data networks and vulnerable to the growing distrust over privacy.

The big question now is how western governments can maintain a trading relationship with China while protecting domestic markets from data breaches. In the US, the direction is already clear: a Department of Commerce “entity list” restricts American technology exports to more than 300 Chinese companies and entities.