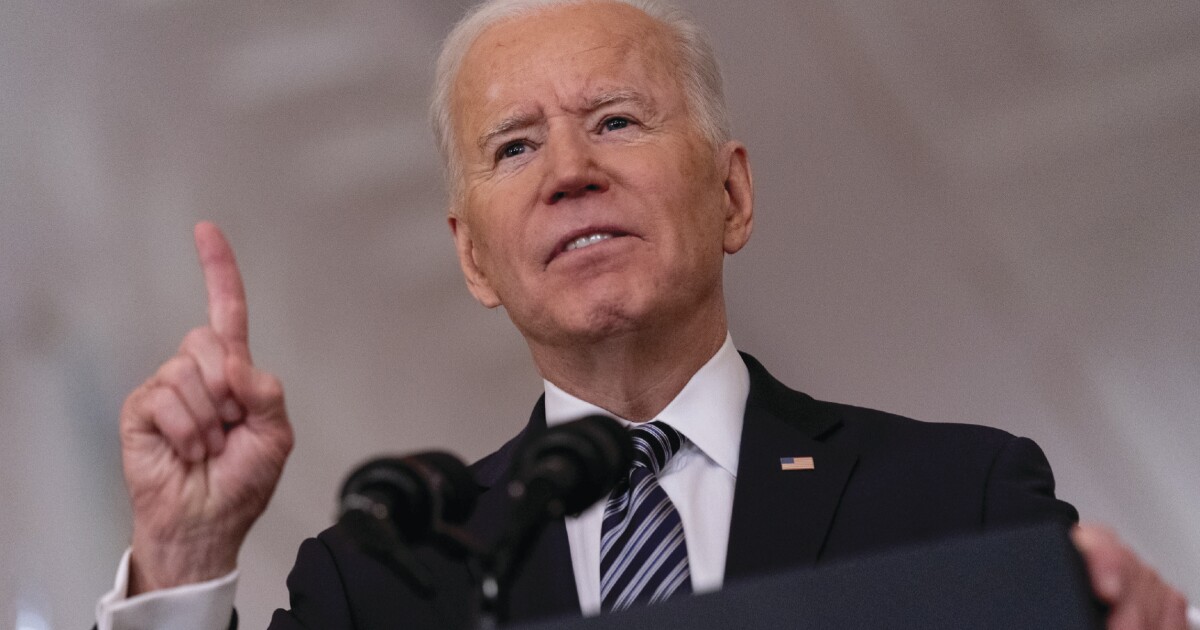 President Biden is getting ready to shift from doing one of the most popular things Democrats often do, lavishing federal spending on favored constituents, to one of the least popular: raising taxes.

“Everybody likes to spend money on their priorities,” said Tom Schatz, president of the fiscally conservative group Citizens Against Government Waste. “For Republicans, it’s mostly defense and national security spending. For Democrats, it’s mostly nondefense spending. When they all get together, they agree on more spending for everyone’s priorities.”

But Biden is moving on from his $1.9 trillion COVID-19 relief package. He spent much of last week on the road promoting in battleground states and preparing for a $2 trillion infrastructure package for his administration’s first significant tax increase.

“Anybody making more than $400,000 will see a small to a significant tax increase,” Biden told ABC News in a rare interview. “If you make less than $400,000, you won’t see one single penny in additional federal tax.”

Whether the public accepts that characterization will go a long way toward whether Biden’s proposal triggers a political backlash. He would like to raise the top marginal income tax rate back to 39.6%, where it was after President Bill Clinton raised taxes in 1993 and before President George W. Bush began cutting them in 2001.

The Clinton tax increase, which included a 4.3-cents-a-gallon hike in the gasoline tax, proved controversial. Despite large Democratic majorities in both houses of Congress, it passed the House by one vote and cleared the Senate only with the aid of Vice President Al Gore’s tiebreaking vote. The plan did not contain Clinton’s promised middle-class tax cut.

Politically, it proved a pyrrhic victory. The tax increase helped Republicans sweep the House and Senate in 1994. Rep. Marjorie Margolies-Mezvinsky, the Pennsylvania Democrat, credited with casting the deciding vote for the tax increase at the time, was among the incumbents defeated.

Other Democrats distanced themselves from Clinton. “The taxman cometh,” Sen. Richard Shelby told reporters after the 42nd president’s first budget proposal was unveiled, defying a request for a three-day grace period before assailing its details. Invited to Gore’s office to smooth things over, Shelby instead traveled with a bank of television cameras to keep up his criticism of the plan.

In 1995, Shelby switched to the Republican Party and therefore remained in the Senate majority.

Clinton claimed vindication when instead of a tax-induced recession, the internet boom came a few years later. Treasury Secretary Robert Rubin argued the increased revenues reduced the deficit and stimulated the economy by lowering interest rates. Republicans countered that economic growth would have been even faster without the tax hike and took partial credit for the first balanced federal budget since 1969.

Deficits soon returned after the Bush tax cuts, though Republicans maintained that other economic shocks, including the 2007-08 financial crisis, played a more prominent role than the supply-side rate reductions. But that prompted President Barack Obama to try to repeal the 2001 and 2003 cuts. When repeal was ultimately confined to the tax cuts for upper-income earners, the political damage was limited (though Republicans did win back the House in 2010 and then the Senate in 2014).

Biden is hoping to end up more like his old boss than Clinton in the 1990s. But they do need to clean up their messaging on the scope of the tax increase. Asked at a daily press briefing whether the $400,000 income threshold for higher taxes applied to individuals or households, White House press secretary Jen Psaki replied, “Families.”

Psaki was then asked to clarify what Biden meant by a “small to significant” increase. “It depends on how much money you make,” she answered. “Are you a billionaire? Then you may pay more in taxes than someone making, you know, a family making $425 [thousand]. You know, there’s going to be a range in any tax proposal.”

The following day, Psaki swatted away any talk of tax increases being bad for an economy trying to recover from the pandemic. “Well, the resident is certainly focused on ensuring the economy is continuing to recover and that people are going back to work and able to put food on the table to feed their families,” she told reporters. “When we’re talking about people — families making over $400,000 a year, that’s about 2% of households in this country.” Clinton vowed only to raise taxes on the wealthiest 1% to 2%.

Still, many Democrats from deep-blue and deep-pocketed districts would like to see the $10,000 limit for deducting state and local taxes scrapped. The SALT cap is a tax break Republicans eliminated under President Donald Trump. Senate Majority Leader Chuck Schumer of New York is among those who would like Biden to bring it back. The Joint Committee on Taxation believes that it will cost $357 billion over the next five years.

Nor has the White House given up on new spending, with the Cato Institute’s Chris Edwards describing Biden’s infrastructure plan as “a Trojan horse” for a panoply of liberal policies.