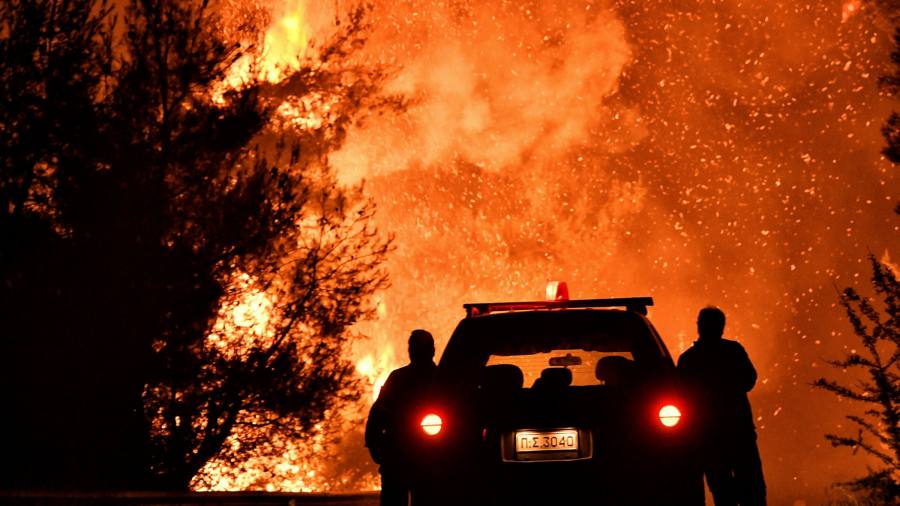 The European Central Bank has identified “a major source of systemic risk” in the preliminary results of its economic stress test to gauge the impact of climate change on 4m companies and 2,000 banks over 30 years.

Luis de Guindos, vice-president of the ECB, summarised the findings in a blog post on Thursday, saying: “In the absence of further climate policies, the costs to companies arising from extreme weather events rise substantially, and greatly increase their probability of default.”

His warning came shortly after another senior executive said the ECB was prepared to raise the amount of capital required at any banks considered to have particularly high levels of climate risks in their balance sheets as early as this year.

There are generally accepted to be two main types of climate risks for banks: one is physical risk, such as flooding and wildfires; the other is the transition risk that policies to cut carbon emissions could cause a sharp rise in companies’ costs and hit their profits.

The ECB’s moves underline how the central bank has zeroed in on climate change, making it an important part of its strategy review, which is due to conclude in September, while also announcing plans to conduct more climate stress tests on eurozone banks next year.

Economists expect the focus on net-zero carbon emission targets by central banks to play a major role in shaping financial flows. “Markets respond to signals from central banks, and the seriousness of intent with which they consider net-zero targets is likely to have a profound bearing on financial market decisions that will ultimately determine capital formation and, thus, the carbon trajectory of the economy,” said a report published this week by the London School of Economics Grantham Research Institute and the Soas University of London’s Centre for Sustainable Finance.

De Guindos said the initial results of this year’s economic stress test had already shown that climate change “represents a major source of systemic risk, particularly for banks with portfolios concentrated in certain economic sectors and, even more importantly, in specific geographical areas”.

The final results of what the ECB described as the first “economy-wide climate stress test” are due to be released by July. It will then be used to model how banks could respond by shifting their exposure away from the riskiest companies, what impact this could have on the wider economy, and how it will affect insurers and non-bank financing companies.

The ECB used data provided by Four Twenty Seven, an affiliate of Moody’s, and research house Urgentem, to model three potential scenarios: an orderly transition to a greener economy, a disorderly transition with limited physical risks from climate change and a “hothouse” world with few green policies leading to extreme physical risks.

The central bank found the biggest polluters and companies based in regions most exposed to physical risks from climate change, “could be exposed to up to four times as much climate risk as the average firm over the next 30 years”.

Separately, Frank Elderson, an ECB executive board member, told a Morgan Stanley conference this week that it would increase the capital demanded of banks considered to be most at risk. Elderson, who also chairs the Network for Greening the Financial System, a group of central banks seeking to tackle climate risks, said the ECB would “not precipitate” any shift.

But he said: “Even now we don’t exclude that if in a specific institution we were to see risks that need to be addressed then under pillar 2 [individual capital requirements for banks] we would not shy away from that.” He added that any international agreement on higher capital requirements for climate risk in banks was unlikely to happen soon, as “these decisions take time and are controversial”.