Hello from Brussels, where the Covid-19 vaccine-exports issue continues to generate rancour, misinformation and infantile point-scoring even faster than the pharmaceutical factories can turn out the jabs themselves.

Last week it was the turn of Charles Michel, president of the European Council of EU member states. Evidently stung by widespread criticism of the bloc’s export restrictions (recently activated by Italy to block a shipment to Australia) Michel accused the UK and US of imposing outright vaccine export bans themselves. Delighted at being given a free hit, Boris Johnson’s government took time off from preparing a bizarre propaganda video about its vaccine triumph (while ignoring Britain’s world-class Covid death rate) to rebut the charge with glee.

Johnson was right (improbable, but it happens sometimes). Britain has no legal export prohibitions. Why the EU continues to draw attention to its failings given that the procurement story will probably die down by the summer isn’t clear. Still, beyond the squabbling there’s a nuanced point about international co-operation to stimulate and manage the supply of vaccines, which is our main piece today. In other news, the EU on Friday released the full market access “schedules” for its contentious investment treaty with China. Informed observers were not immediately impressed. We’ll look at the details in later newsletters. Tit for Tat draws on new data on how Brexit has affected the number of UK companies exporting goods, from Rebecca Harding of Coriolis Technologies.

Free trade in vaccines can’t be left to trade policy

The grievance in EU circles about being beaten up at the World Trade Organization and elsewhere for vaccine-export restrictions was inflamed further last week by revelations that EU-based companies have been selling millions of shots abroad, including to the UK. (Today’s Trade Secrets author knows this all too well: Pfizer supplies the world with vaccines made in the Belgian town of Puurs, 35km away from his desk, but he won’t get one for months.) Meanwhile, Britain’s agreement with AstraZeneca may have involved reserving UK vaccine production for the home market. Surely that’s a de facto export ban?

Well, not really. It’s basically just good procurement. It’s not surprising the UK government is better at commercial contracting than the European Commission: it’s got long experience of mass purchases via the NHS. Nor do contracts with domestic production provisions have the same effect as export restrictions. Massive domestic procurement (especially combined with government R&D spending) stimulates production: by contrast, the ability to intervene to override existing contracts with overseas buyers leads to uncertainty.

In fact, the UK experience underlines a bigger truth. Efficient trade in vaccines is far too important to be left to trade policy. This isn’t a homogeneous global commodity like wheat, produced by an established competitive market, in which government interventions are generally limited to fairly basic trade tools such as tariffs and quotas. Covid vaccines have viciously complex supply chains with governments intervening at multiple stages, not just in trade measures such as export restrictions, but in state-funded R&D, procurement, enforcement of patents and other IP, regulation and issuing of licences.

A country such as Britain, with a centralised government with procurement expertise (and nimble regulators) in familiar partnership with an established pharma industry, has got demand and supply increased and aligned pretty quickly. The EU: not so much. Arguments are breaking out between member states about procurement and distribution. Production at an AstraZeneca plant in the Netherlands has been held up by delays in regulatory authorisation.

In fact, the risk of intra-EU supply restrictions may also have contributed to Brussels’ worries about vaccines going abroad. According to a Bloomberg report in January, Belgium has discussed with the commission a law that would allow it to block vaccine sales to the rest of the EU. That echoes last year’s intra-EU bans on sales of protective gear that led to bloc-wide export restrictions on face masks.

As we’ve said before, export restrictions are a symptom of internal problems. Beating up governments for using them is natural and healthy, but addresses only part of the issue. The US doesn’t have formal legal export bans, but according to the New York Times, tens of millions of doses of the AstraZeneca vaccine that might be sent abroad are sitting in storage in Ohio and Maryland because the US regulatory process is out of sync with government procurement and distribution plans.

If these issues can’t be fixed for the next viral pandemic, let alone this one, the call for self-sufficiency might increase, and with it the potential for truly epic inefficiency and duplication. There should be a lot of potential for positive-sum trade between the vaccine-producing countries. An admirably detailed new paper from a group of academics and World Bank researchers shows that most vaccines and components are made in a “vaccine club” of 13 economies, which trade inputs and finished products heavily with each other in sophisticated supply chains. In theory, that high interdependence ought to militate against protectionism, especially when multiple vaccines are in production, through a trade version of mutually assured destruction. But trying telling the EU that.

If governments want to unleash the power of international supply chains in vaccines while achieving a sense of fairness they need, if not actually to co-ordinate with each other (the US Food and Drug Administration takes dictation from no one), a much clearer sense of how regulatory, procurement, licensing and manufacturing capacity among them operate and interact. As the vaccine-club paper concludes, agreements to limit export restrictions are important, but they aren’t enough on their own.

It’s hard, this vaccine-supply-chain-in-a-pandemic stuff, isn’t it? Commenting on trade policy was much easier when it just involved pointing at protectionists and going “ha ha, you don’t understand Ricardo”. It’s the way the world is now, though, and not just in Covid vaccines either. We’re not about to rename this newsletter Secrets of International Economic Interdependence and the Technological Changes and Government Interventions That Affect It, Including But Not Limited to Trade Policy, but it might help for us mentally to substitute that title for the actual one from time to time. 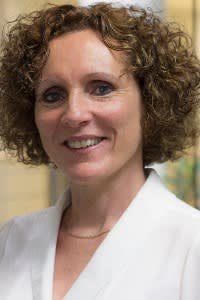 Rebecca Harding: ‘It is really time for the government to focus on the smaller exporters and in particular on access to export finance’

You’ve been crunching the numbers on how the Brexit vote and the divorce process have affected the number of British companies exporting their goods. What have you found out?

The number of exporters has generally declined across the UK. Just under 43,000 businesses exported in December 2020 compared with 45,610 in December 2017. Smaller businesses are being particularly badly hit. We also saw November and December 2020 show a slight pick-up in the numbers, as companies rushed to complete exports ahead of the December 31 deadline that marked the end of the transition period. This uptick reversed again in January and February. 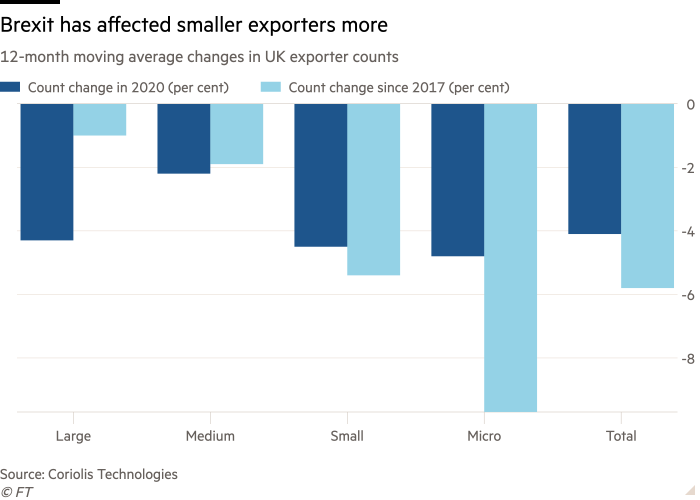 Have any companies thrived?

Although the numbers of larger companies have declined and employment has dropped back, revenues have actually increased. So it looks like they have used the Brexit period to streamline and make their operations more efficient. Smaller businesses who have had less resource to allocate to this type of risk mitigation have really struggled.

There’s a sector element to this, too: all service sectors have seen counts, revenues and employment fall back. But broadly the effects are worst for sectors that have been exposed to trade uncertainty, like transport and logistics, construction, wholesale and smaller manufacturing businesses have seen their revenues and employment levels hit by the whole process since 2017.

It is really time for the government to focus on the smaller exporters and in particular on access to export finance. UK Export Finance has stepped into the export guarantees market, covering up to 80 per cent of the risk to lenders, but while this is welcome, there is a lot to be done to make SMEs themselves export-finance ready. The guarantees need to be linked with an exerted effort by banks and the government to work together to raise awareness and streamline and reduce the costs of the SME onboarding process for banks, because otherwise all the guarantees in the world will not make any difference.

Video: Covid-19 and the business of vaccines