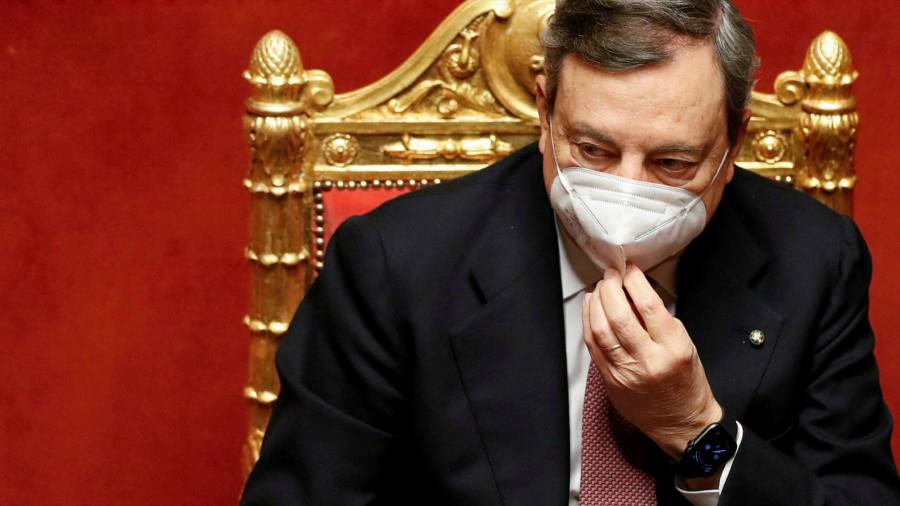 In its early economic response to the pandemic, “whatever it takes” was the EU’s mantra. Central bankers and politicians alike quoted former European Central Bank president and now Italian prime minister Mario Draghi’s dictum from 2012, keen to show they had learnt from the eurozone crisis and would not repeat the same mistakes. The commitment was backed up by policy. The ECB swiftly launched an aggressive monetary response and the bloc agreed an unprecedented joint borrowing facility to aid the recovery, finance stimulus and demonstrate solidarity.

One year on, the eurozone needs to rediscover the “whatever it takes” spirit. The ghosts of the past crisis have resurfaced: governments are not spending enough to support the recovery and stimulus plans pale in comparison to more aggressive “go big” measures being debated in the US.

This is despite the fact that Europe has had a worse economic crisis. While the greater use of furlough schemes has kept a lid on unemployment, the euro area’s economy was 6.8 per cent smaller at the end of 2020 compared with a fall in US national income of 3.5 per cent. A slower vaccination rollout, too, is likely to mean it will take longer than on the other side of the Atlantic for the health emergency to end. That will mean even more economic damage — especially for the European economies reliant on international tourism.

More export-oriented economies will be comfortable relying on demand from the US, boosted by the stimulus, and China to drive the recovery — as it did, particularly for Germany, after the 2008 crisis. That would be a mistake, allowing further divergence between the north and south and undermining the hard-won solidarity during the first phase of the pandemic. The recovery from the previous crisis showed that robust growth in Germany cannot power the whole eurozone.

While economists debate the risks of the US “overheating” from further stimulus, there is little chance of that in the EU. This is not only due to the different size of spending packages — a planned €420bn of discretionary stimulus in the EU for 2021 compared with the $1.9tn being debated in the US, according to UniCredit — but also because the euro area probably went into the pandemic without having fully recovered from the previous crisis. Official estimates of “output gaps”, the difference between economies’ performance and their potential, were already far too low before coronavirus struck. Even with greater “automatic stabilisers” — Europe’s more generous welfare states — substantial excess capacity will remain in the bloc.

Southern European countries, particularly Italy, now have a chance to demonstrate with the recovery fund that borrowing will be put to good use — and that creditor countries’ legitimate concerns that the money will be wasted are unfounded, justifying a relaxation of the EU’s budget rules. If Draghi can now demonstrate that aggressive fiscal policy can be used to pursue a reform package in Italy, that would help to restore confidence in risk sharing and give political cover for further national stimulus across the eurozone.

The bloc has already proven its critics wrong once during this crisis: the recovery fund demonstrated the extent to which member states were committed to making the project work and backing that with cash. As vaccinations raise the possibility of bringing the health emergency to an end, Europe’s leaders must make sure they do not lose that early sense of urgency. Only then will they truthfully be able to say they did whatever it took.