Samyr Qureshi is CEO of Knack, an app that connects college students with tutors at more than 60 college campuses across the United States. Qureshi co-founded the app in 2015 with Dennis Hansen and David Soker. Qureshi was photographed at the company’s headquarters in Tampa, Fla, on February 2, 2020. Chris Zuppa/The Penny Hoarder

Samyr Qureshi and his college friend Dennis Hansen had an idea for an app that would match students with student tutors on the same college campus. That was 2015. Six years later their company, Knack, has secured more than $1 million in equity investments and is worth 20 times more than when it started. It also landed Qureshi, CEO, and Hansen, Chief Product Officer, on the 2020 Forbes 30 under 30 list, which highlights the country’s top innovators.

The steps they took to make Knack a reality offer a game plan for anyone with a viable idea and the drive to turn an idea into an app.

1. Find a Need and a Solution

Qureshi was tutored as a young child and then was a tutor himself in college. He and Hansen knew tutors helped with academic success, but realized it wasn’t always easy to find one. Through research they learned the “near peer” concept was successful. The more recently someone has taken a class and learned a concept, the more effective they are at helping someone else understand it. They decided to create an app that would match students at the same campus, one needing help in a course and another who has had recent success taking the same course.

Airbnb and Uber were taking off so Qureshi and Hansen learned all they could about how these apps got started and why they were a success. They also researched how people were finding tutors on Craigslist, Wyzant and other resources, and what was working and what wasn’t. They decided what they wanted their app to offer and researched what it would take to create it.

3. Build a Team with the Variety of Talent Needed

The friends asked David Soker, who had a master’s in electrical and computer engineering and knew how to build apps, to join their team. He’s also a co-founder and now Chief Technology Officer at Knack.

“We intentionally put our team together to have engineers,” Qureshi said. Paying an outside company to build the app would have easily cost six figures. 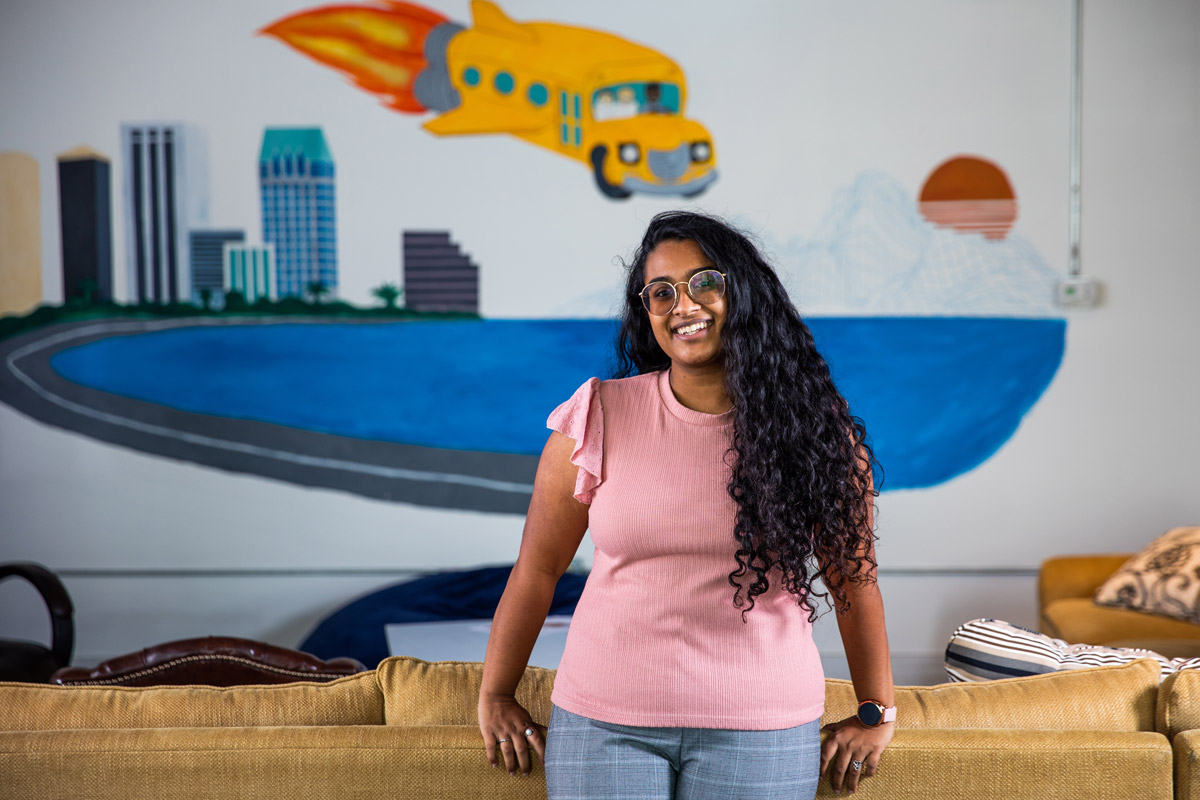 Sonia Duraimurugan is an MBA student at the University of South Florida who used the Knack app to make money as a tutor. Before using Knack, she relied on food banks for groceries. “I was literally strapped for money,” she said. The app provided a way for her to earn as much as $12 per hour. Chris Zuppa/The Penny Hoarder

Qureshi and Hansen, both graduates of the University of Florida, secured a spot at UF’s Gator Hatchery, an incubator that offers students workspace, office support, mentors and other resources for startups. There are hundreds of University Business Incubators (UBIs) across the country at schools of all sizes. Some offer grants or stipends to help support students financially while they create their business or product. Others have relationships with banks that provide special loans to entrepreneurs. Most UBIs are adept at creating networking opportunities for students to gain access to potential funders, often alumni. They also have media relations teams that get publicity for students and their endeavors.

UBIs keep students informed about competitions and grant applications. But even if you aren’t in a UBI, there are many competitions for entrepreneurs and college students launching an idea as well as grant opportunities. In 2016, Knack won first place and $25,000 cash in UF’s Big Idea Business Plan Competition. That led to more interest from investors. A few family members wanted to invest in the company to help it get off the ground. The Knack co-founders sold them shares in the business in exchange for equity. They priced their stock by comparing their company to the market value of similar existing startups.

7. Get Your App in Front of Users

To reach an audience of users and tutors, they ran digital ads and marketed the app to students on numerous college campuses. One of the most effective marketing tools was creating a network of ambassadors on college campuses to represent Knack

“We recruited them cold from job postings, interviewed them and hired them,” Qureshi said. “We gave them $300 to $500 a month and a list of tactics that we had tested at UF: ‘Go buy pizza and entice some students to hear about it.’”

8. Have a Side Gig or Full-Time Job

Qureshi, who had been working professionally about two years, quit his job and lived off of his savings after joining the UF business incubator to create Knack. Later, when the company moved to Tampa, he worked for a cookie delivery business on the side to make ends meet.

Final Advice: Go For It

Qureshi’s advice to college students or recent grads who have an idea that could turn into an app is to “go for it.”

“We were pretty naive and that gave us some pause. I was a pre-law student so I didn’t have any business experience. The majority of our team did not study business,” he said. “We learned a lot from mentors. We were srappy, scraping up dollars where we could.”

Katherine Snow Smith is a freelance editor and reporter in St. Petersburg, Fla., and author of Rules for the Southern Rulebreaker: Missteps & Lessons Learned.

Everything to Consider Before You Sell Pokemon Cards

What Will the Stimulus Stimulate?