A strong manufacturing recovery partly offset a downturn in services across the eurozone in February, according to a widely watched survey of businesses which suggested that the bloc’s two-speed economic performance is intensifying.

The IHS Markit flash German purchasing managers’ index for manufacturing surged to a three-year high of 60.6 — up from 57.1 in January, data published on Friday showed. In France, the corresponding index rose 3.4 points to 55.

A figure above the 50 mark indicates a majority of businesses reported growth in activity from the previous month.

Restrictions to control the spread of coronavirus have kept many services businesses closed across the eurozone in the early weeks of this year. But the bloc’s manufacturing sector is experiencing a strong uptick in activity, boosted in part by demand from Asian economies including China.

Maddalena Martini, an economist at Oxford Economics, said the data “underline the sectoral divergence and highlight the effect of the current health situation in the eurozone, where persistently high infection rates are forcing governments to extend and tighten containment measures”. 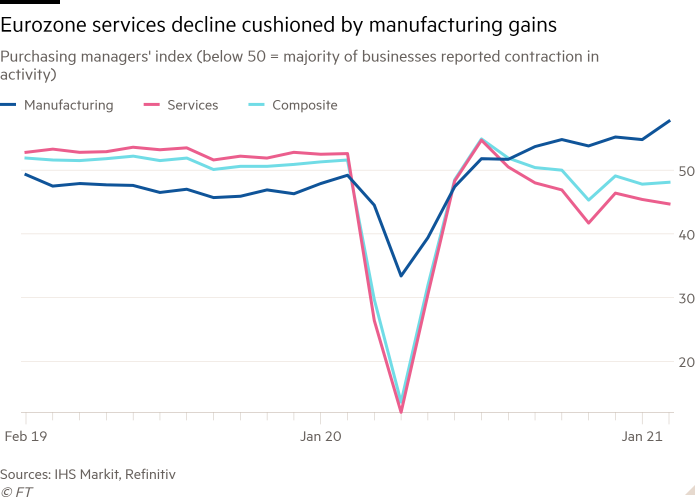 The pan-eurozone manufacturing PMI rose to 57.7, up from 54.8, while the equivalent services measure fell to 44.7 from 45.4 — the lowest reading in three months. The composite PMI, an average of both sectors, was 48.1.

However, “factory output grew at one of the strongest rates seen over the past three years, thanks to another impressive performance by German producers and signs of strengthening production trends across the rest of the region”, he said.

The eurozone figures suggest that manufacturing strength may not prevent the bloc from falling into a second pandemic-fuelled recession — defined as two consecutive quarters of negative growth — in the first three months of 2021, after output contracted in the final quarter of last year. That followed the summer’s rebound from the historic recession in the first half of 2020 as the pandemic first took hold.

But businesses grew more optimistic in February, with sentiment regarding output in the year ahead rising to the highest since March 2018 thanks to hopes of successful Covid-19 vaccine rollouts in the coming months, IHS Markit found.

Florian Hense, economist at Berenberg, said the figures “suggest that the downturn did not intensify in February and the risks to our first-quarter GDP calls remain balanced”. He expects eurozone output to fall 2 per cent quarter on quarter in the first three months of the year.

The manufacturing resurgence faces some headwinds: supply chains were already strained by shortages of key parts and a rebound in global trade, and disruption lengthened delivery times by a record amount in February, prompting the sharpest rise in factory gate prices for almost three years.

“Average prices paid for inputs by manufacturers rose at a rate not seen since April 2011, in turn feeding through to the steepest rise in prices charged at the factory gate since May 2018,” IHS Markit said.

But the bloc was not as badly hit as the UK, where Brexit worsened the wider supply chain disruption and weakened manufacturing activity, while services companies continued to suffer from a fall in activity, albeit at slower pace, IHS Markit said.

Analysts at Morgan Stanley said that despite the eurozone’s rapid inflation in industrial goods, price pressures were lower in its larger services sector, so they expected the “pass-through to core inflation to be modest in the near term”.