Hello and welcome from Frankfurt and London. We are, unfortunately, not in southern California, from where today’s main piece is based.

Shipping rates on major trade routes have soared in recent months owing to the boom in demand for consumer durables, causing bottlenecks in global supply chains. One of the routes most affected has been from East Asia to the US west coast and we’ve looked at how the Port of Los Angeles, one of the busiest in the western hemisphere, is coping. Charted waters looks into the rollout of Russia’s Sputnik V vaccine.

The Port of LA is massive, its 15 marinas spanning 43 miles of the southern California coastline with 82 cranes lifting containers off docking ships to shore. But wild fluctuations in the flow of trade — combined with the impact of the pandemic on working conditions — have left it struggling to keep up.

“A container sits for six days at the moment, in normal times it’s about two days,” says Gene Seroka, executive director at the Port of LA. “Our terminals are now 95 per cent full — we say 80 per cent is usually full capacity. Warehouses and distribution centres [are] overflowing with cargo — and that’s here in southern California where we have the largest warehousing complex in the world.”

To get a sense of just how wild those fluctuations have been, the port saw cargo volumes sink over the first five months of 2020, before soaring in the second half of the year as trade rebounded. For the year as a whole, 2020 volumes were only slightly below those in 2019 — despite the pandemic stretching the dock’s 15,000 workers to the max. 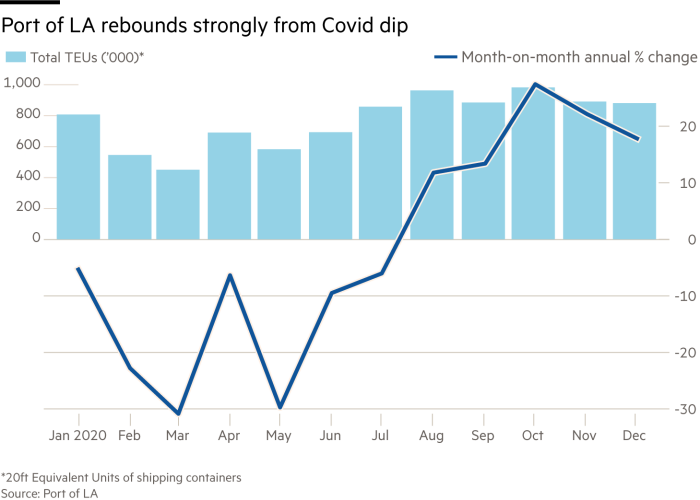 LA was in the throes of a bad Covid-19 outbreak when we spoke to Seroka in early February, with 800 staff either off sick or quarantining. Some workers have now received their first shot of vaccines.

“Our dockworker teams are not immune — there has been a spike in Covid testing in LA,” says Seroka. “January will show more of our workers [tested positive] than for the whole of 2020.”

Those that were working were doing 5.5 days a week to keep up. Last March as the pandemic first spread around the world, terminal operators in LA and Long Beach quickly came to an agreement with the International Longshore and Warehouse Union, which represents workers in all ports on the west coast. PPE was provided for all workers, distancing rules enforced and hygiene standards raised.

But that has had a knock-on effect on processing times, particularly given the increase in the amount of time between shifts, owing to cleaning requirements. 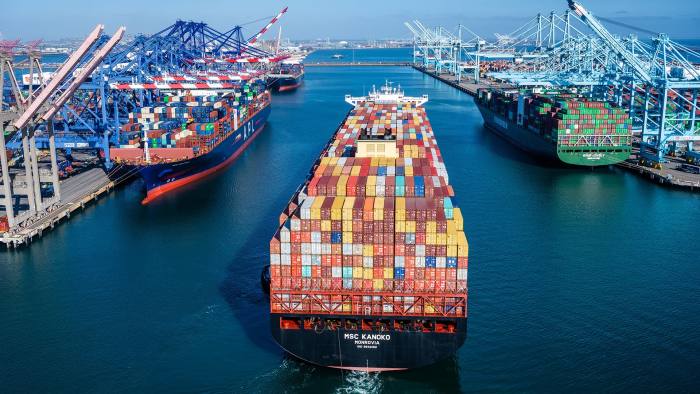 It’s a similarly disorderly story elsewhere. Murphy estimates the proportion of global carriers’ ships that arrived at ports on time fell to 44.6 per cent in December 2020, down 31.7 percentage points year on year.

“Terminals, warehousing and distribution centres are all being squeezed,” says Michele Grubbs, vice-president of the Pacific Merchant Shipping Association, a trade body for those working at west coast ports. “Instead of being transit points, they are becoming storage facilities.”

What’s happening in ports is one aspect of one giant problem for the global logistics industry. John McLaurin, president of the Pacific Merchant Shipping Association, says: “The entire supply chain is overwhelmed.”

“It’s not just about what’s going on on the water, it’s on land too. It’s the entire end to end of the intermodal system, it’s backed up at every point,” he says.

Along with rampant demand for consumer durables in the US, manufacturing output has soared as factories managed to protect their workers from Covid-19 far better than other places of business. Seroka says the Port of LA has been working with industry to expedite turnround times for components coming into the ports.

“About 20 to 25 per cent of our imports are parts and components for US manufacturing. We continue to work around the clock on those issues,” says Seroka.

The slowdown is also hitting US exports. Many of the containers returning back to East Asia are almost empty, as shipping lines rush vessels back to Asia to keep up with demand. “Our exports have been down 24 out of 26 months, mainly on the heels of trade tensions with China and the strength of the US dollar,” Seroka says. “I don’t see a change in that anytime soon.”

Our Moscow team Henry Foy and Max Seddon have written a piece on the production and dissemination of Russia’s Sputnik V vaccine. The vaccine, which a paper in The Lancet found had an efficacy of 91.6 per cent based on phase 3 trial data, has been ordered in countries ranging from Mexico to Myanmar. 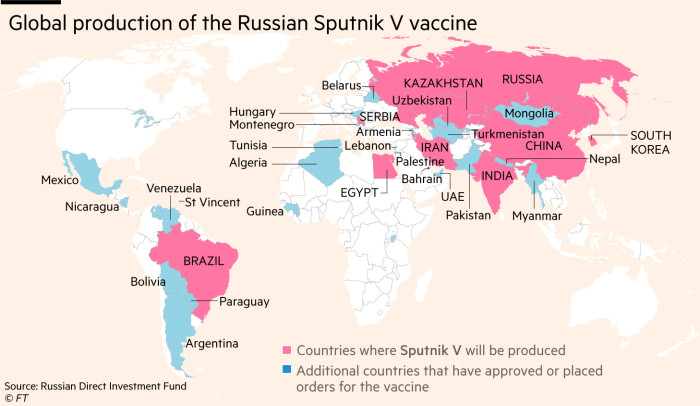 However, Russia will have to rely on a worldwide network of private factories to supply vaccine to international markets, with the network months away from reaching full production levels, according to the report.