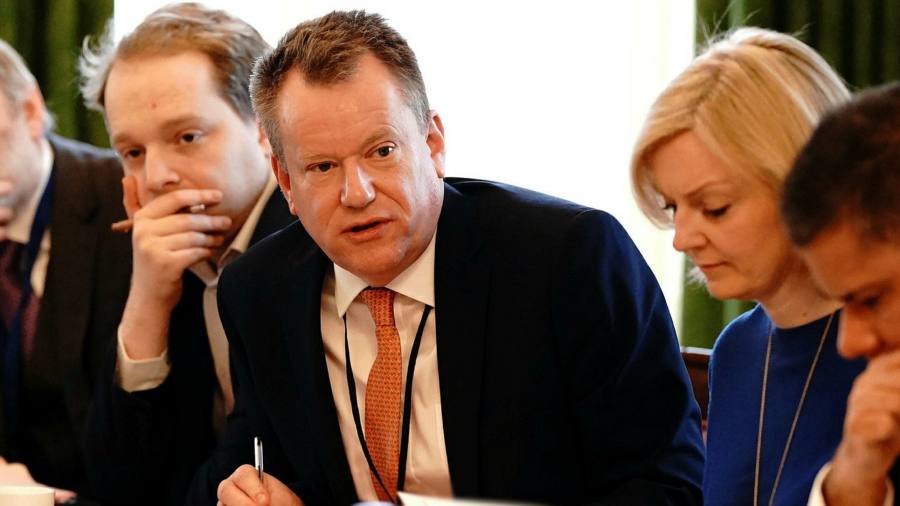 Lord David Frost’s appointment as the new UK minister in charge of relations with the EU could impede efforts to improve trading arrangements in Northern Ireland, senior diplomats and businesses have warned.

Frost’s promotion on Wednesday to Boris Johnson’s cabinet as the minister in charge of the UK-EU partnership council caught ministers and officials by surprise. Michael Gove, the Cabinet Office minister, had been expected to oversee the trade deal.

UK government insiders said Frost insisted on a senior ministerial role to ensure that his writ ran across Whitehall and he was able to perform his new EU role properly. “He wanted to be able to knock heads together,” said one official.

Former diplomats said Frost’s tough approach to dealing with the bloc, as seen during the trade agreement negotiations, might complicate the situation in Northern Ireland, where supply chains have been disrupted since a trade border was put down the Irish Sea between the region and Great Britain as part of the UK-EU Brexit agreement.

Sir Ivan Rogers, a former UK ambassador to the EU, said Frost’s appointment would add to the “residual distrust” between London and Brussels on Northern Ireland which has partly been driven by leading EU member states wanting to hold Johnson to the letter of the deal.

Frost’s perceived role in last year’s threat to break international law and overwrite sections of the Northern Ireland protocol in the trade agreement via the UK internal market bill would not help lower the temperature around the deal, he warned.

“I’m afraid they associate that with David Frost — they think it was his idea and he pushed it through, and not everyone in the UK government was on board with it. I’m afraid that then adds to the residual distrust,” he told an event hosted by the EU-UK Forum.

Lord Kim Darroch, another former UK ambassador to the EU, said: “David is a former colleague and I wish him well, but I’m concerned that this move will sacrifice the relationship Michael Gove was developing with [the EU’s point person on the council] Maros Sefcovic.”

Darroch wondered whether Frost would be able to make the “compromises on sovereignty” needed to help British business overcome some of the trading problems they face post-Brexit.

“I fear the idea that David will be ‘co-ordinating relations’ with the EU27 member states is a recipe for confusion and duplication with the work of the Foreign Commonwealth and Development Office,” he added.

Frost’s insistence on a “co-ordinating role” with both the EU institutions and the 27 member states means he will have to work closely with Dominic Raab, foreign secretary, who is in charge of bilateral relations with Berlin, Paris and other European capitals.

But Foreign Office veterans are uneasy about the new arrangements. “Will Frost be going off to see all of Raab’s European counterparts?” said one former diplomat. “I don’t think this will end well.”

Northern Ireland business leaders met with Gove and Sefcovic on Thursday to discuss the “workable solutions” that both sides agreed last week must be found for the protocol.

Trade bodies in the region have backed the UK government’s call to extend grace periods before full border checks, including costly export health certificates, are implemented on goods travelling from Great Britain to Northern Ireland after April 1.

At the same time, the Northern Ireland business community expressed private misgivings that the Frost appointment risked undoing the solid working relationship that officials and industry stakeholders agree Gove and Sefcovic have established.

“It is fair to say that there is some unease and nervousness in NI business circles given Frost’s apparent lack of pragmatism and flexibility — something that was widely seen as a saving grace for Michael Gove,” said a senior Northern Irish business figure.

After the meeting Gove said on Twitter that the talks had been “constructive” with regard to the challenges businesses faced on the ground, and that both sides remained committed to finding “pragmatic solutions”.

Aodhán Connolly, director of the Northern Ireland Retail Consortium, said the meeting with Gove and Sefcovic was an important first step but warned that the April 1 deadline presented “a huge challenge” to retailers and households in Northern Ireland.