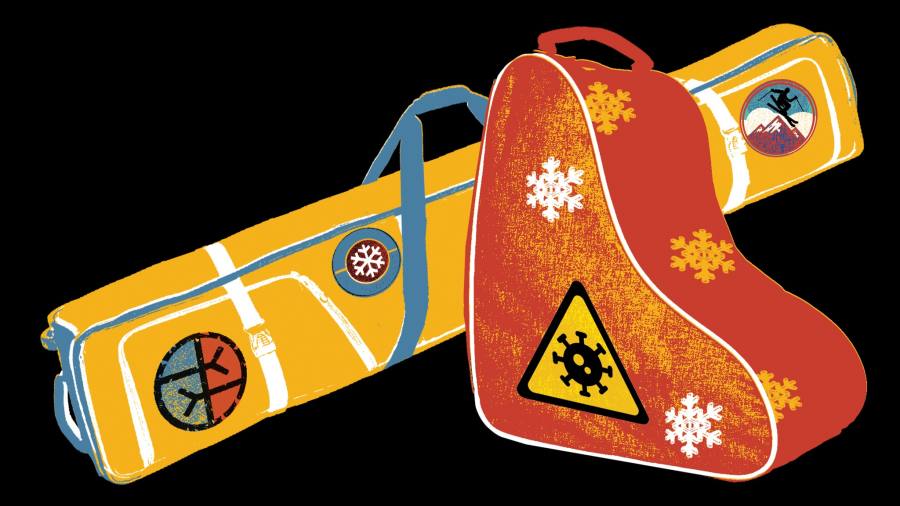 Just over a year ago, I jumped on a plane and flew to Davos, Switzerland, to take part in the World Economic Forum’s annual meeting. My friend (and fellow FT columnist) Rana Foroohar did the same. Shortly afterwards, we went skiing together in Massachusetts. In those innocent pre-Covid days, that sequence of events seemed unremarkable. Most global executives — and many journalists — have spent a great deal of their time whizzing around in aircraft.

Skiing on the US’s East Coast (which Rana and I have done together for years) does not normally attract attention — and certainly not envy: compared with the Swiss Alps, the hills there are low, the weather (in) famously cold and the food far worse than fondue.

But our February 2020 trip was striking: soon after our families arrived, we all succumbed to fevers, hacking coughs and breathlessness so bad that we barely made it on to the slopes. Was it Covid-19? Had we unwittingly caught it in Davos in late January, where thousands of globetrotters were crammed into small spaces for several days?

WEF officials tell me there is no evidence that their conference was a superspreader moment. When our families took an antibody test many months later, most of us were negative. But whatever the source of the illness, our ill-fated ski trip was an unwitting sign of the times. After all, as the historian Niall Ferguson points out in a forthcoming book, Doom: The Politics of Catastrophe, one main reason why Covid-19 spread so fast in 2020 was that so many hypermobile people like him (or me) were unthinkingly whizzing around on planes.

Another reason why the disease then spun out of control — as Ferguson also notes — was that the political leaders who jet into events such as Davos have been notably bad at creating governance systems that can respond to the risks posed by globalisation.

At the WEF meeting in January 2020, for example, some officials pointed out the risks of the strange, unfolding epidemic in China and various discussions were staged. But they were so low-key that it never occurred to me shortly afterwards that I might have contracted the coronavirus. And even when it subsequently became clear that Covid-19 was not “just” a Chinese problem, politicians were slow to unveil joint action — or even to learn lessons from places such as China.

Why? Ferguson blames the shortcomings of modern western political structures. That is undoubtedly true. But another, subtler problem is that pandemics have a nasty tendency to make people and politicians retreat inwards because of both the physical isolation of lockdown and fears that “strangers” will bring germs. It is thus little wonder that pandemics have often sparked xenophobia; indeed, in May 2020 the UN secretary-general António Guterres lamented in a tweet that “the [Covid-19] pandemic continues to unleash a tsunami of hate and xenophobia, scapegoating and scaremongering” which needs “an all-out effort to end hate speech globally”.

But overt xenophobia is not the only problem; subtler forms of myopia tend to flourish too. This is not always obvious today since digital platforms are supposed to connect us all, even when we cannot travel. Indeed, the level of global integration created by the internet has shot up under Covid-19, as revealed by thought-provoking metrics published annually in the DHL Global Connectedness Index. Its 2020 report, for example, cites research showing that international internet traffic soared 48 per cent from mid-2019 to mid-2020.

But the fact that digital information is moving quickly across borders does not necessarily mean that empathy and understanding are rising as well. Far from it. The experience of being trapped in different physical places during the past year has left people inhabiting different mental islands, even if they seem connected by cyberspace. In the Covid-19 era, extreme globalisation has suddenly collided with stark localisation, creating a confusing mix.

Where will this lead? It is unclear. But a couple of weeks ago Rana and I decided to reprise our annual February trip to the Massachusetts “mountains”. Unsurprisingly, the physical nature of skiing has changed: although ski resorts are (thankfully) still allowed to operate, lift capacity is limited and skiers must wear masks.

What was equally notable was our mental shift. In years past, I tended to take those small frozen hills for granted, or even scorn them. Now I feel profound gratitude that I can slide down them at all, breathing freely. In today’s world, normality is the true luxury. So is the ability to celebrate whatever place you find yourself in.

But there was another change too: as we snapped selfies this year, I was beset with doubts about whether I should send these out on the internet to distant friends. Is it crass to post pictures of skiing, when places such as the UK are locked down and many people are suffering? What attitudes are “normal” or “acceptable” in this connected-yet-disconnected world? The answer is unclear, not just for the trivial issues like this, but for numerous far more serious ones, including what globalisation now means.

Follow @FTMag on Twitter to find out about our latest stories first. Listen to our podcast, Culture Call, where FT editors and special guests discuss life and art in the time of coronavirus. Subscribe on Apple, Spotify, or wherever you listen.