Today’s main piece takes a look at whether the optimism in Europe over US engagement on digital services taxes is misplaced — as usual Congress holds a huge amount of power and it is far from clear whether any international agreement on how to levy the US tech giants is a priority. Charted waters, meanwhile, delves into China’s central bank digital currency and where that ties into plans to internationalise usage of the renminbi.

US could take years to make a digital sales tax law

As Joe Biden’s administration settles in, Europe is hoping for a swift resolution to one of the more heated elements of the transatlantic trade tension: digital services taxation.

Efforts by various countries around the world — not just European — to raise levies on Big Tech have long caused consternation in DC, with both Democrats and Republicans lashing out at any country that dared to tax the likes of Facebook, Amazon and Alphabet. Trump’s Treasury secretary, Steven Mnuchin, was widely blamed for stalling talks held at the OECD. Diplomats are optimistic that the more conciliatory comments of his successor, Janet Yellen, might lead to that elusive multinational agreement.

Overly so, in our view.

The US, and therefore the OECD, is going to struggle to get anything done quickly. The Treasury still doesn’t have all of its relevant tax staff in place yet, even though the OECD is insisting on an agreement of some sort by the summer. But that’s a relatively minor issue. The main problem is Congress.

Some aides in Congress suspect that the OECD agreement will be so high-level and principles-based that there won’t be an opportunity to move ahead and legislate this summer in any case — it’ll be a show of progress, but potentially lacking the detail needed to actively change US tax law. Even once the detail is agreed to, there are several potential stumbling blocks for a global digital tax entering into US law.

Lawmakers have to approve of any new legislation that involves changing the US tax code, and also of any new treaties. And under US law, opening the tax code opens up all US tax law for amendment. Incorporating a new global tax agreement into US law will not be quick, because it’s impossible to limit the scope and pass a small bill.

There’s perhaps a larger problem, still. When politicians meet tax, things tend to boil down to whether a measure raises revenue for their constituents, or for the country more broadly. It’s hard to see any US lawmakers getting excited about a global agreement without being certain that the US gains something from it. Businesses want certainty, and tech giants don’t want to pay all of the unilateral digital services taxes that different jurisdictions impose on them, but beyond that there doesn’t seem much of an advantage for the US.

Add to this the fact that lawmakers are at present focusing all of their energy on large, set-piece bills designed to push Biden’s agenda forward and help the US recover from the economic devastation caused by coronavirus, and it’s difficult to see any agreement with the OECD being priority legislation on the Hill. There’s the economic stimulus bill, and then there are two broader bills — on infrastructure and immigration — coming down the pipeline. New OECD-linked tax legislation could be linked to the larger infrastructure bill, but the timings would have to work.

At the same time, the geopolitical stakes of maintaining the status quo are quite high.

Under the Trump administration, and going into the Biden administration, the US used trade enforcement mechanisms to hit out at countries that tried to tax its tech giants more. The argument in Washington was that the taxes unfairly discriminated against US companies, and thus were an example of unfair trade practices.

Before leaving office, Trump’s US trade representative Robert Lighthizer instigated 11 Section 301 investigations — the same procedure used to slap tariffs on billions of dollars of Chinese imports at the height of the Trump administration’s trade war — on countries that either had digital services taxes in law, or were plotting to add some. Those countries ranged from France and Turkey — which are both actively collecting the taxes — to the UK — which has the tax on the books but isn’t quite collecting it yet — to countries or entities just thinking about adding some, such as the EU and the Czech Republic. Many of those investigations have been concluded, and the countries in question found “guilty” of discriminating against US tech companies. Which means the Biden administration can quite quickly carry out the reviews and other procedural bits necessary to put tariffs on those countries’ imports.

Without a satisfactory OECD solution, it is easy to see how the situation could quite quickly escalate into another wave of the transatlantic trade war.

Meanwhile, there’s growing anxiety among businesses about when other countries might remove their unilateral tariffs. Many have agreed to do so when an OECD solution is reached. If it takes years for Congress to fully implement the legislation and only a political commitment could be achieved this summer — would that be enough progress to justify a removal of their digital services taxes?

Biden’s new USTR Katherine Tai has yet to be appointed, and so we don’t quite know what she’ll do with the Section 301 tariffs options she’ll inherit — but with strong bipartisan opposition to unilateral tax measures on the Hill, we may not be seeing the end of the digital tax fight any time soon.

James Kynge and Sun Yu have written a Big Read on the e-yuan, China’s central bank digital currency, or CBDC, that’s well worth a look. For those of you who have not been following the topic, central banks are now trying to issue their own digital money in response to the threat posed by the likes of Facebook’s Libra project (now rebranded as Diem) and cryptocurrencies, as well as (in China’s case) popular mobile payments providers such as Alipay and WeChat Pay. Of the major economies, China is leading the way on CBDC and is streets ahead of Washington, Frankfurt and London.

What’s that got to do with trade? Well in China’s case, some are linking it to the internationalisation of the renminbi. “A bigger goal of ours is to challenge the dominance of the US dollar in international trade settlement,” said the director at a large state-owned bank, who spoke to Kynge and Sun, though he noted that progress would only be gradual. As the chart below shows, the renminbi’s use among international investors has been growing (again, only at a gradual pace). 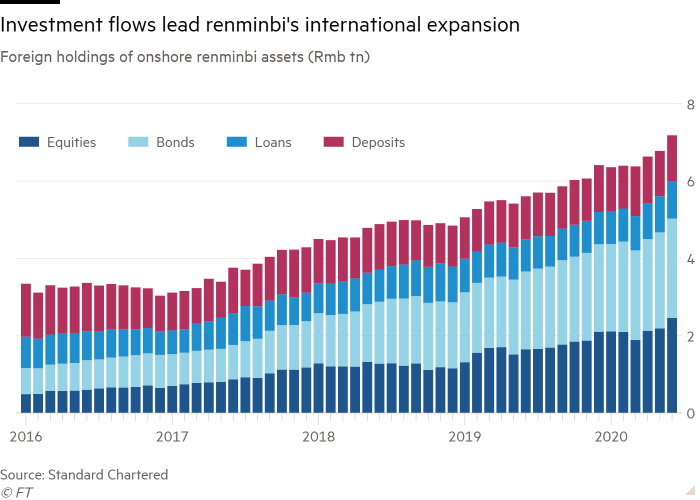 We share the article’s view that mass adoption of the e-yuan won’t come just yet. The renminbi remains miles away from challenging the dollar as the global reserve currency of choice.

But this is one to watch. Cross-border payments are not nearly as cheap and quick as they ought to be given the leaps in the digitalisation of currency. If central banks such as the Federal Reserve and the European Central Bank stand still, then businesses could look increasingly to Beijing.