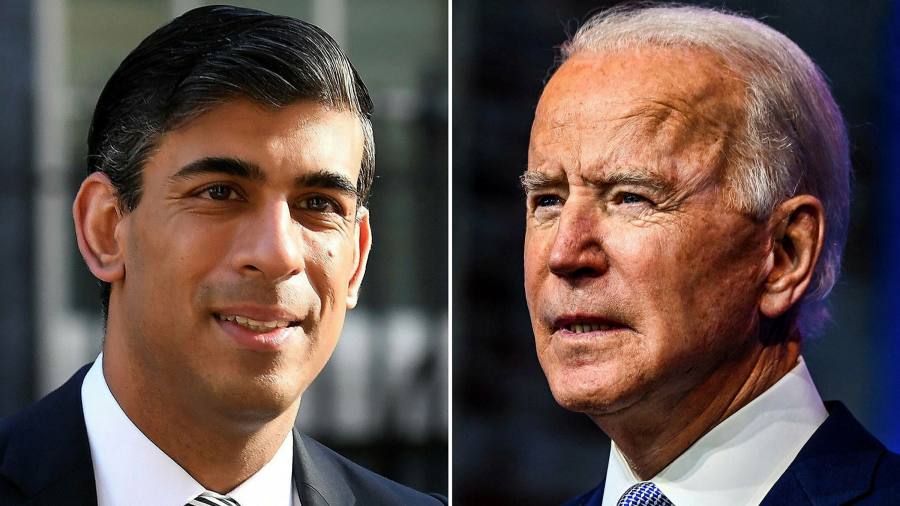 Britain needs to “act big” with a £190bn fiscal stimulus matching the ambition of Joe Biden in order to restart the economy and avoid long-term stagnation, a UK think-tank has warned.

At present, the UK is planning a much smaller fiscal boost over the coming year than that under way in other countries, even though its economy has been hit harder than most by the pandemic, according to analysis by the Institute for Public Policy Research.

Chancellor Rishi Sunak has so far committed the government to additional spending of £40bn, equivalent to around 2 per cent of gross domestic product in the next fiscal year relative to pre-pandemic plans, IPPR said.

Germany plans to spend almost twice as much, relative to the size of its economy, in the same period. Canada could spend between 3 and 4 per cent of GDP, although the timing is less clear. But these countries’ plans are dwarfed by the new US administration’s proposals for a $1.9tn stimulus package worth almost 9 per cent of GDP over the coming year.

IPPR argues that the UK needs to launch a stimulus package on a similar scale to the US — worth £190bn, or 8.6 per cent of GDP in 2021-22 — to avoid a vicious cycle of business bankruptcies, lay-offs and depressed demand.

It calculates this as the amount of extra spending needed to lift the UK economy back towards its full potential, and argues that it should be directed towards pandemic-related spending, an extension of job and income support schemes and help for businesses and public investment.

Some extension of emergency support measures is likely when the UK chancellor sets out plans for the coming year in his March 3 Budget. But IPPR is weighing into a politically charged debate. Sunak has told Conservative party colleagues that he wants to make fiscal discipline a “dividing line” with Labour at the next election, and could use the Budget to set out what that will mean. But he is under pressure from backbench MPs to avoid tax rises in the short to medium term.

Anneliese Dodds, shadow chancellor, has argued, in line with current economic orthodoxy, that a “responsible approach to fiscal policy” would allow governments to borrow more after a shock to leave the economy “well set-up for the long term”.

But while the IMF and OECD have endorsed looser fiscal policy to aid the recovery, the vast scale of stimulus planned in the US goes much further than most had envisaged. The Biden proposals have split opinion among economists, with some previously outspoken proponents of fiscal stimulus underlining the risks of pumping up demand too far and unleashing inflation.

Stimulus on a similar scale would be even more contentious in the UK, which has a history of higher inflation and less slack in its labour market than in the US.

But Jung said inflationary risks should be lower in the UK because its economy had been harder hit and was still running much further below potential than the US economy. Given low borrowing costs, government debt could end up lower as a share of GDP as a result of the package, he argued, if it led to a faster recovery and lower borrowing in future years.