Two of the biggest banks on Wall Street are calling a new “supercycle” in oil, with JPMorgan Chase and Goldman Sachs both predicting prices will soar when the pandemic abates.

The most bullish forecast has international crude prices staging a comeback towards the $100-a-barrel region — a level not reached since 2014. The expected surge is predicated on the belief that fiscal stimulus will boost consumption just as investment in new production has been sucked out of the industry. Such a disconnect between demand and supply, fuelling a lasting surge in prices, are the basic conditions of a so-called supercycle.

It would transform conditions in the oil sector, which was hammered last year by the Covid-19 hit to demand and doom-laden predictions about what the widespread embrace of electric vehicles will mean for the market.

“We’re going to be short of oil before we don’t need it in the years to come,” JPMorgan’s head of oil and gas, Christyan Malek, told clients on a conference call last week. “We could see oil overshoot towards, or even above, $100 a barrel.”

Brent crude, the international benchmark, is up more than two-thirds since the end of October to $63 a barrel, driven by vaccine optimism and production cuts by leading exporters. 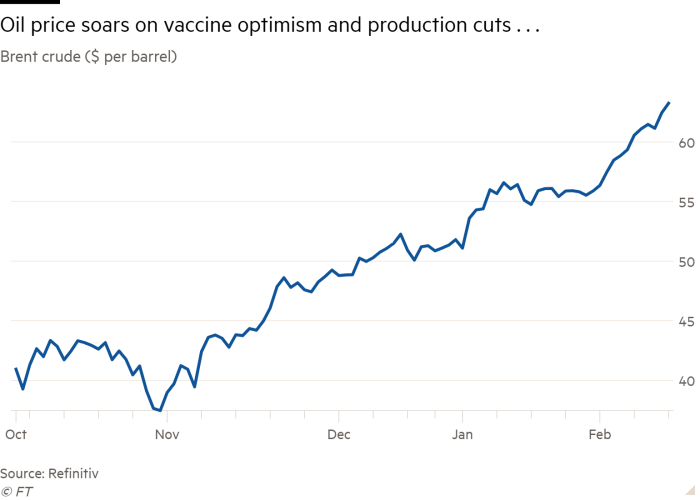 Veteran Goldman Sachs analyst Jeffrey Currie, who was a key voice in oil’s last supercycle between 2003 and 2014, told the Financial Times he believes there are real risks that oil trades in the $80 range “or even higher this year”.

But this time it is not the emergence of an energy-hungry China that he predicts will boost consumption, but stimulus spending by governments around the world, such as the $1.9tn proposed in the US by the Biden administration — including for “green” infrastructure.

“This type of stimulus aimed at middle and lower class income [households] creates significant, commodity-intensive consumption, as they have a much higher propensity to consume,” Currie said. “These people don’t drive Teslas. They drive SUVs.”

He draws a parallel with President Lyndon Johnson’s “Great Society” initiative in the 1960s, arguing that the boost it gave to the US middle class — and the accompanying growth in oil consumption — helped set the stage for the oil price spikes of the 1970s, when Middle Eastern oil producers were able to squeeze supplies to the US.

Arjun Murti became one of the most famous oil analysts of the last supercycle after he made the call in 2005 that oil could go above $100 a barrel, while working alongside Currie at Goldman Sachs. He later predicted it would go on to $150-$200 a barrel, before it topped out at $147 on the eve of the financial crisis.

Now working as an adviser and energy company board member, he thinks supercycle calls may prove “premature”, but he can imagine scenarios where oil prices strengthen significantly. “There are still some hurdles to cross but a lot will be decided by the strength of demand,” Murti said.

Before the pandemic, global oil demand was around 100m barrels a day. It fell to an average of around 90m b/d last year and analysts predict it is unlikely to reach pre-pandemic levels until 2022, once vaccine rollouts allow a wider resumption of long-distance air travel.

Murti argues that if oil demand grows by around 500,000 b/d in the coming years, it would be insufficient to create a supply gap. However, if that growth ramped up to 1.2m to 1.4m b/d — as it did following the 2014-15 price crash — that could spark a new supercycle.

Increases in production could prove the big stumbling block for the bulls. Crude supply has taken a hit during the crisis, with the US losing around 2m b/d of production in the last year owing to lower prices. But additional shortfalls required to create a supply gap are less obvious. Supply cuts by Saudi Arabia, the UAE and other Opec+ members have created about 8m b/d of spare capacity.

“In the short term there isn’t really any shortage of oil and we’re seeing countries like the UAE planning to boost capacity,” said Patrick Gibson, director for global oil supply at consultancy Wood Mackenzie. “However, in the oil industry, it’s always difficult to time the arrival of supply at the right point.”

Pierre Andurand, who made his name in the last supercycle by placing big long-term bets on higher prices, is more cautious this time. Last year his more aggressive fund earned more than 150 per cent betting on oil’s crash below $20 a barrel.

“The path of the oil price is very much in Opec’s hands for this year, depending on how much supply they choose to release back on to the market,” Andurand told the Financial Times.

“I believe the path of oil prices is likely to be upward for 2021 and the following years, but there are also many elements that could derail that move up,” he added, citing the return of Iranian oil, the pace of producers’ supply increases, and the risk that Covid-19 vaccines struggle against variants of the disease.

Even the bulls think any supercycle could be shorter than last time around. Demand growth could start to flatten as early as 2025, in Currie’s view. JPMorgan analysts are bullish until later in the decade, though they too forecast a peak in demand, eventually.

Sceptics include Andy Hall, one of the most successful oil traders of the last supercycle — and now retired from day-to-day trading. The oil and gas industry is in “terminal decline”, he said. “Perhaps this dead cat can bounce a few more times. But would that be a supercycle?”