Wall Street stocks made further advances on Friday with the S&P 500 and Nasdaq Composite closing at records, as investors weighed the prospect of increased fiscal stimulus against the possibility of higher inflation.

The blue-chip S&P 500 index rose 0.5 per cent — led by energy, materials and financials — while the tech-heavy Nasdaq Composite also gained 0.5 per cent. For the week, the indices were up 1.2 per cent and 1.7 per cent respectively.

Investors poured a record $58bn into global stock funds this week, with the US receiving the majority of stock inflows, according to EPFR data collated by Bank of America.

Janet Yellen, US Treasury secretary, on Friday told finance ministers and central bank governors from the Group of Seven nations to “go big” on fiscal support to promote a lasting recovery.

The S&P 500 is up nearly 6 per cent so far this month, driven by “continued pledges from the Fed to keep monetary policy loose during the recovery”, said Jim Reid, research strategist at Deutsche Bank. The “building momentum behind the [Joe] Biden stimulus plan” was also supporting sentiment, he added.

But the prospect of a large US stimulus package had raised concerns over the possibility of increased inflation, said Savvas Savouri, chief economist of Toscafund Asset Management. “Maybe we are seeing those in markets denying the US is in for forecast-beating inflation — the monetary versions of flat-earthers — finally capitulating or awakening?”

The FTSE All-World index gained 0.2 per cent on Friday and remains up nearly 6 per cent for the month, driven by hopes of further economic stimulus in the US and better news on global coronavirus infection rates and vaccine programmes.

“Global equities have had a good start to the year,” said Gregory Perdon, co-chief investment officer at private bank Arbuthnot Latham. In Europe, equities climbed as political developments in Italy took centre stage, propelling the price of the country’s government debt to an all-time high. 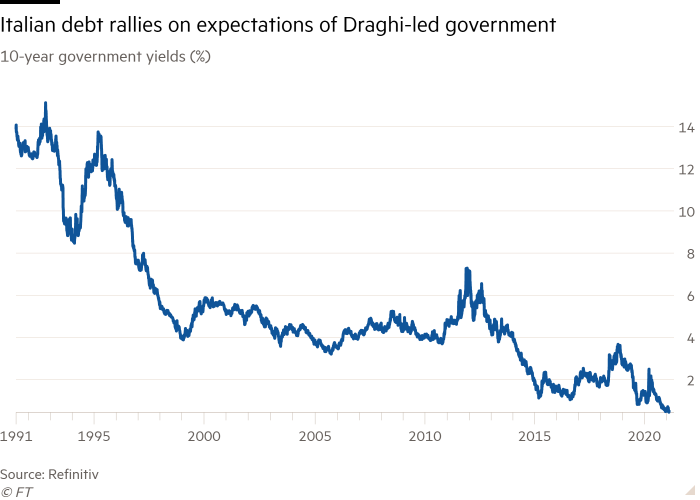 Italian bonds rallied this week on the prospect of a national unity government in Rome led by Mario Draghi, former president of the European Central Bank. The yield on Italy’s 10-year debt fell to a record low of 0.42 per cent, before ending Friday at 0.48 per cent. Draghi will be Italy’s next prime minister after presenting the country’s president with a national unity government on Friday evening and having won the backing of almost every large political party.

“The Draghi news is quite good for the markets,” said Perdon, highlighting the benefits of the politician’s ECB ties. “He is part of the Davos crowd, but he has a very good record of delivering what he says.”

The region-wide Stoxx Europe 600 index closed 0.6 per cent higher, giving it a weekly gain of 1.1 per cent, while Germany’s Xetra Dax climbed 0.1 per cent and the CAC 40 in Paris rose 0.6 per cent.

Brent crude, the international oil marker, clung near its highest level since January 2020, rising 2.4 per cent to just above $62.6 a barrel.

The end of the party looms for markets high on stimulus