Hello from an icy Brussels. The wintry blast that dumped a snowfall on the city this week symbolised the rapid cooling of (choose one): EU relations with Russia; affection for China in eastern Europe; and the popularity of European Commission president Ursula von der Leyen. The president sort of apologised to the European Parliament yesterday for the vaccine export restrictions and Northern Ireland protocol boo-boo, though unfortunately slipped into the evasive passive voice (“mistakes were made”) that is traditional among politicians on such occasions. Today’s main piece stands back a bit from the global fray to ask whether governments are right to be scared of voters when writing trade deals, and Tall Tales looks at renewed evidence that the supposed trend of companies diversifying away from China has strict limits.

Voters may not like trade, but do they really care?

We trade commentator types spend an awful lot of time moaning that our brilliant ideas don’t get implemented because elected governments tiresomely cite popular opinion and voter legitimacy as a constraint. It is, to be frank, a hopelessly democratic and tediously accountable state of affairs.

A standard view is that US president Joe Biden, for one, can’t do trade deals because he is facing a trade-phobic, or more broadly globalisation-phobic, electorate who put a frothing protectionist in the White House four years ago.

Similarly, we’ve heard quite a lot in Brussels circles in recent years about trade and foreign policy, with a slightly jarring Ultimate Fighting Championship undercurrent, having to become “muscular”. Apparently the good people of Europe, weary of their weedy trading bloc being pushed around by the Beijing bullies, demand a dose of the old fisticuffs. Of the other big trading powers, obviously China has a slightly less formal relationship with public opinion than its democratic counterparts. But Narendra Modi’s government in India, despite its alleged attachment to liberalisation, was too frightened of its electorate to sign even the relatively shallow Regional Comprehensive Economic Partnership. 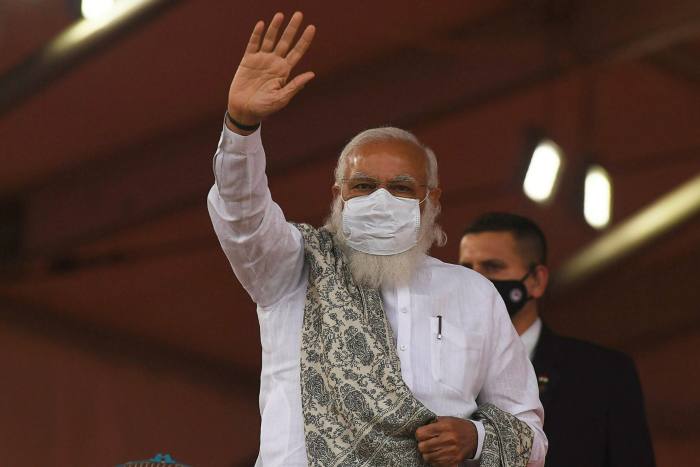 Indian prime minister Narendra Modi. India’s government is reliably among the most trade-phobic in any international gathering © AFP via Getty Images

Now, far be it from us to give advice to governments on getting reelected. The last time today’s Trade Secrets author braved an election was several decades ago in student politics, where the quality of governance frequently resembled the goings-on at Handforth Parish Council that went viral in Britain last week. We, like Jackie Weaver, have no authority here, no authority at all.

But it’s notable that there’s a very uncertain relationship between opinion polls and even voting outcomes on trade on the one side and what governments think is politically imperative on the other.

You’d never guess from Biden’s harsh words for trade agreements, for example, that US public support for international trade last year was its highest for a quarter of a century. If tearing up norms of liberalised trade to protect US manufacturing industry had been the key to retaining the mid-western states, Donald Trump would still be in the White House. When Trump was putting tariffs on China, American public opinion was, on balance, against his actions. Like many issues, views on trade among lots of voters are driven by pure partisanship. Republicans like protectionism when there’s a protectionist Republican in the White House: it’s a self-reinforcing argument.

In fact, as various bits of research have pointed out, trade scepticism and getting tough on China can be a proxy for a bunch of other things. Some, such as attitudes to race, have very little to do with foreign or trade policy at all.

One of Trade Secrets’ favourite polemicists on this and indeed many issues, Scott Lincicome of the Cato Institute, points out that even when American voters do have views on trade, they don’t think it’s a priority. As a notable scene in The West Wing about laws against burning the American flag had it: it’s not just what people think but whether they actually care. Over the next four years, Lincicome told Trade Secrets recently, the influence of partisanship means that what the Republican party thinks on trade will depend largely on how big a role the trade-phobic Trump continues to play.

In the EU, there’s a general sense that populism equals protectionism. But, generalising heroically, rightwing populists are much more anti-migration than they are anti-trade. The really noticeable swing towards scepticism of trade deals in the European Parliament at the last election, for example, was the influx of Macronites into what is now the centrist Renew Europe grouping.

Now, public opinion in polls doesn’t translate straight into election results, particularly given the idiosyncrasies of political systems that rest on the support of small but well-organised groups. It’s quite remarkable that India’s government is reliably among the most trade-phobic in any international gathering — it’s basically not signed a meaningful deal since the multilateral Uruguay Round in 1994 — despite Indian public opinion in polls being reliably pro-trade. In the US, Biden is almost certainly politically wise to hold off on even trying to pass any major trade deals for a while because key parts of his base aren’t keen on them, whatever the wider electorate believes.

But in the longer term, it is quite possible some governments have more room for manoeuvre on trade policy than they think. The idea that voters don’t like globalisation, and thus that trade liberalisation is politically toxic, can be both wrong on the facts and a non sequitur. As usual in our line of work, it’s a lot more complicated than that.

Phil Stafford has a great scoop on Amsterdam ousting London as Europe’s top share trading hub post-Brexit. To illustrate the point of how European share trading has been affected by the UK’s split from the EU, here’s a chart looking at average daily volumes in five of Europe’s top bourses in December 2020 and last month. Rather stark, as you can see. 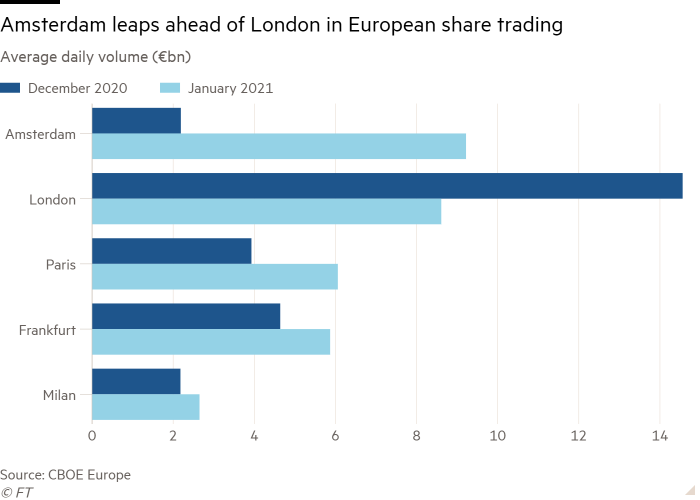 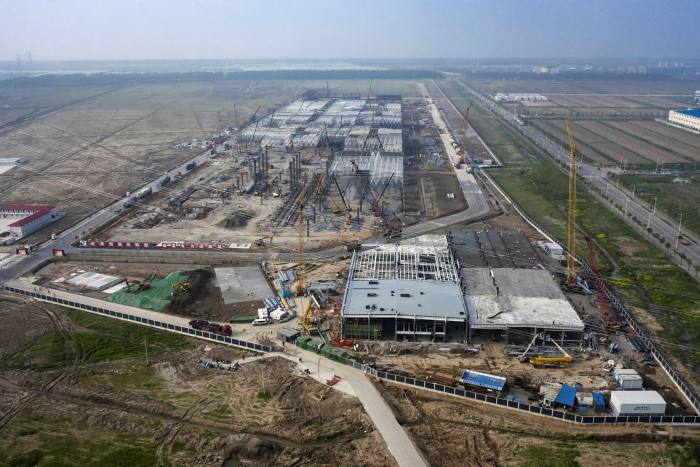 A Tesla factory under construction in Shanghai in 2019. China has overtaken the US as the biggest global destination for foreign direct investment © Bloomberg

Remember when Covid-19 and Donald Trump’s trade war were going to cause a great decoupling between the US (and other rich countries) and China? Remember how multinationals would stop buying Chinese goods or setting up operations there and would head to the other side of some (unspecified) Great Divide? We were sceptical of this for goods trade and foreign direct investment — it’s more accurate for data-heavy tech to be fair — and the longer things go on, the taller the tale has seemed. As we noted recently, FDI into China and other Asia emerging markets last year held up while crashing in rich countries, with China overtaking the US as the biggest global destination for FDI. Our Nikkei stablemate yesterday explained how the need to site in China to access the local market meant that for Japanese corporations, decoupling wasn’t really an option. You need to invest there (and transfer technology one way or another) to sell there. It may of course be that this is all a matter of time and long investment lags, and decoupling will happen at some point. There’s not a lot of it about as yet though.

Brussels has sent a warning shot to the UK to address “shortcomings” in its application of post-Brexit customs rules for Northern Ireland and rejected key demands for flexibility from the British government on the eve of a crunch meeting on Friday.
Read more

India has raised import duties on solar lamps, mobile phone chargers and other products largely coming from China, in an effort to rebalance trade and boost local industry.
Read more