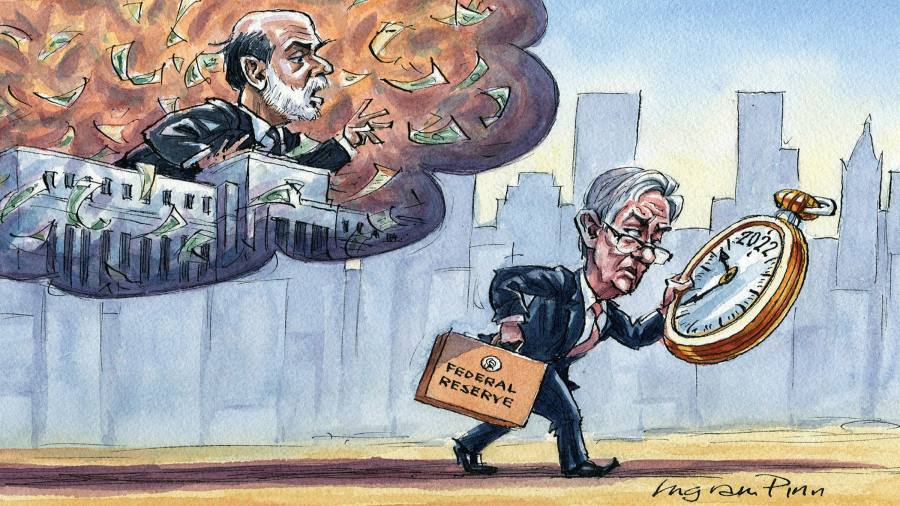 If in doubt, double down. That is one way to frame the current message from Jay Powell, Federal Reserve chair.

At the start of the week, there was lively speculation about whether the Biden administration’s proposed $1.9tn stimulus plan could unleash inflation — and thus force the Fed to rein in its loose monetary policies soon.

However, in a speech to the Economic Club of New York on Wednesday, Powell emphatically ruled this out. Instead, he stressed that the Fed needed to maintain a “patiently accommodative” policy stance until the economy hits “full employment” and inflation has been running above 2 per cent for some time.

He also said that neither would appear soon. In plain English, this means virtually free money is here to stay for a long time, never mind the inflation chatter. Think years, not months before policy changes.

Is this a mistake? I think so. That is not because I object to the idea of radical monetary policy, or ultra-low rates in general. The Fed was correct to employ quantitative easing after the 2008 crisis to ward off the risk of a depression. So too when Covid-19 struck last year. And while I would prefer to see slightly higher rates now, the current stance can just about be justified by low inflation; in January, consumer prices were unchanged for a second month.

What worries me, however, are the signals that the Fed is sending about the future. Previous generations of central bankers thought it was foolish to give excessively precise signals about future policy as that would either tie their hands or encourage market complacency, or both.

However, over the past decade, central bankers started to offer a framework for how they would respond to future economic data, hoping this would reduce the chance of market shocks by creating more predictability.

That was sensible. But the Fed has now taken this so-called “forward guidance” to a new level that seems dangerous. Most notably, over the past year Fed officials have indicated that policy will stay unchanged until late 2022, if not beyond. That means policy looks time-dependent, not just data-dependent — and since a central bank cannot be both (without magical powers of perfect foresight), this sense of time dependency is shaping investor attitudes.

As it happens, Powell seems minded to correct this. He has said before that he wants to be data-dependent and, on Wednesday, did not mention a precise date when policy would change, instead citing goals such as “full employment” and inflation above 2 per cent as the triggers for a policy shift.

But these are fairly vague targets. They are also moving ones. On Wednesday, Powell also stressed that 2 per cent is no longer an upper limit for inflation, but an average target, meaning he wants inflation to exceed this for a while.

For investors, data dependency is thus discretionary, and on a par with time dependency. And since investors always crave certainty about the future — even more than low rates — this has fostered speculation. Hence the sky high price of assets such as bitcoin or the boom in market vehicles such as special purpose acquisition companies.

Doves may retort that this market mania is a price worth paying to reflate the economy — which, as Powell stressed on Wednesday, helps the poor. Fed officials also fear that pre-emptive efforts to prick the market bubble would recreate a “taper tantrum” — the 2013 market ruction unleashed when Ben Bernanke, then Fed chair, hinted that QE might end.

Powell did not mention “taper” on Wednesday. Yet the ghost of Bernanke’s experience clearly haunts him. As he said three years ago, with touching honesty: “The taper tantrum left scars on anybody who was working at the Fed at that time.”

One bitter irony about current Fed policy is that even if Powell hopes to help America’s poor, cheap money is actually increasing inequality by elevating the value of assets held by the rich. Another irony is that Powell’s efforts to avoid a taper tantrum now, could create a bigger one later. Powell, of all people, seems well placed to recognise this.

Back in March 2013, for example, when Powell was a new-ish member of the Fed’s policy setting board, he warned Bernanke that the Fed’s failure to signal an end to ultra loose policy was prompting investors to take dangerously risky bets.

Then, in June that year, he argued that while an abrupt change in policy could spark market turmoil, it would also be damaging “if investors conclude that serious consideration of reducing [QE] is postponed indefinitely”. As the transcript reports him saying: “We find ourselves in a situation here where we’re on the roof, and there is no risk-free path. We’ve got to jump.”

He should heed that advice. I would not argue that the Fed needs to “jump” by tightening immediately, or threaten to do so; the 2013 taper tantrum shows the danger of abrupt and clumsy talk.

Even so, Powell does need to find a ladder off the “roof”. He should puncture assumptions that cheap money is here indefinitely, or that Fed policy is a one-way bet. Otherwise his attempts to ward off the ghosts of 2013 will eventually unleash a new monster in the form of a bigger market tantrum, far more damaging than last time — especially if investors have been lulled into thinking the Fed will never jump.