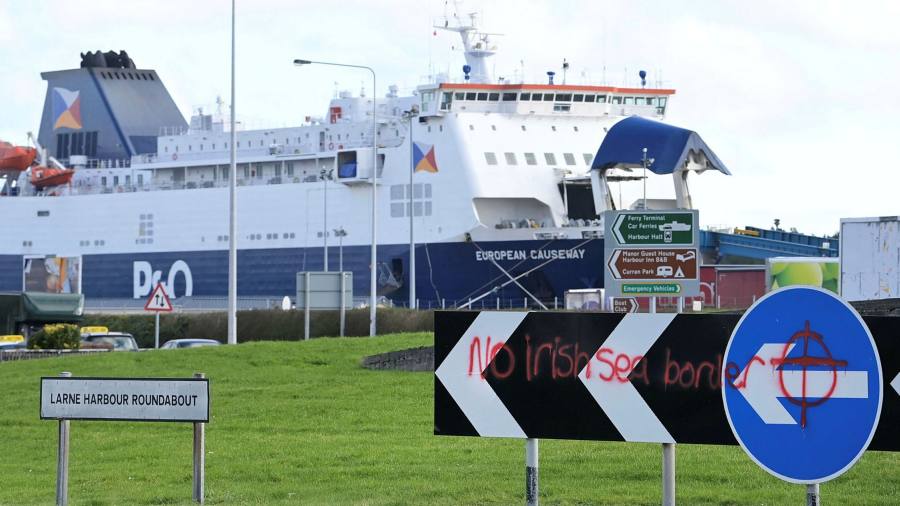 Brussels has sent a warning shot to the UK to address “shortcomings” in its application of post-Brexit customs rules for Northern Ireland and rejected key demands for flexibility from the British government on the eve of a crunch meeting tomorrow.

Maros Sefcovic, EU vice-president in charge of relations with the UK, on Wednesday night wrote to his counterpart Michael Gove laying out a series of complaints over the UK’s compliance with border arrangements in Northern Ireland, escalating tensions over a protocol signed by the two sides as part of the Brexit agreement.

Sefcovic and Gove meet in London on Thursday to address mounting concerns over the implementation of the protocol, which requires all goods flowing from Great Britain to Northern Ireland to comply with onerous regulations under the EU customs code. The creation of a trade barrier down the Irish Sea that divides the UK internal market has riled pro-Brexit Tories and leading Unionists.

The UK government has demanded the EU extend grace periods designed to ease the implementation of the protocol which end in April. Gove, the Cabinet Office minister responsible for the protocol’s implementation, has also demanded an “urgent reset” of the other parts of the deal, including permanently reducing bureaucratic barriers hampering the movement of pets, plants and food products to Northern Ireland.

In his letter, Sefcovic laid out areas where the UK has failed to meet promises made last December under the protocol, including the establishment of fully operational border posts to carry out checks at Northern Irish ports, and failure to provide EU customs officials with real time access to key customs IT systems.

He said addressing such “teething problems” were a “prerequisite to assess whether further” flexibility demanded by the UK was “necessary and justified”. The issues will be raised at Thursday’s meeting, said the letter.

Sefcovic also rebuffed demands for a relaxation of trade barriers in areas like pet passports, food products and seeds travelling from mainland Britain to Northern Ireland. The letter says such demands would require the UK to first fully align with EU regulations in these areas.

The Cabinet Office said: “We will continue to work constructively and pragmatically with the European Commission to restore confidence in the operation of the Northern Ireland protocol.”

The war of words comes as a £355m government-funded support service designed to help British businesses deal with post-Brexit trading arrangements for Northern Ireland is failing to provide traders with basic answers to questions, MPs were told on Wednesday.

The complaints about the Trader Support Service (TSS) — a consortium of customs clearance operators led by IT company Fujitsu formed to provide free assistance to traders — came a month after trade groups warned it was “simply not good enough”.

Stephen McAneney, managing director of logistics group Allied Fleet Services, said there was “no consistency” in the information coming from the service and advice was confusing and conflicting.

“You can phone in and speak to one person and they can give you an answer, and then you’d go away, think about it, then phone back in and get completely the reverse answer,” he told the committee.

Sarah Hards, business development manager at AM Nexday, a retail distributor in Larne, said there was an apparent lack of training among staff who were “pleasant” but often appeared to have “no previous experience” in customs and logistics.

“They really sometimes fail to grasp what you’re talking about even after a long conversation,” she added.

Witnesses from the shipping and logistics industries backed Gove’s demands for more time, including extensions to grace periods, to adapt to rules which are due to come into full force on April 1.

“What I see is huge market distortion currently taking place on a big, big scale,” said Ian Davies, the head of UK port authorities for Stena Line, adding that freight flows had halved from Holyhead to Dublin as supermarkets switched to Scottish routes.

Nick McCullough, the managing director at DFDS Northern Ireland, a shipping line, said turnover for January was 23 per cent down on last year, adding that flows were improving but more slowly than expected. “In a low-margin business that cannot go on for too much longer,” he warned.

The Cabinet Office said: “All of our 700 contact centre advisers have received a comprehensive and detailed training package; many advisers also joined with substantial experience of the customs sector.”

For the rest of the UK, further evidence emerged on Thursday that business, particularly smaller and medium-sized companies, were struggling to adapt to the Canada-style terms of the EU-UK Trade and Co-operation Agreement (TCA).

The British Chambers of Commerce’s survey of 1,000 members found 49 per cent of exporters that responded were experiencing “difficulties” in adapting to the TCA.

As a result, the BCC called for an extension to government plans to introduce full border controls in EU imports to the UK from July 1, tax credits to offset costs of adapting and urgent efforts to minimise burdens of VAT and customs processes on business.

Adam Marshall, the BCC’s director-general, said the UK’s chances of a strong economic recovery after the Covid-19 crisis were being “hit hard” by the impact of the new border with the EU.

“For some firms these concerns are existential, and go well beyond mere ‘teething problems’,” he said, adding ministers should increase outreach to EU counterparts to solve the issues that are “stifling trade in both directions”.