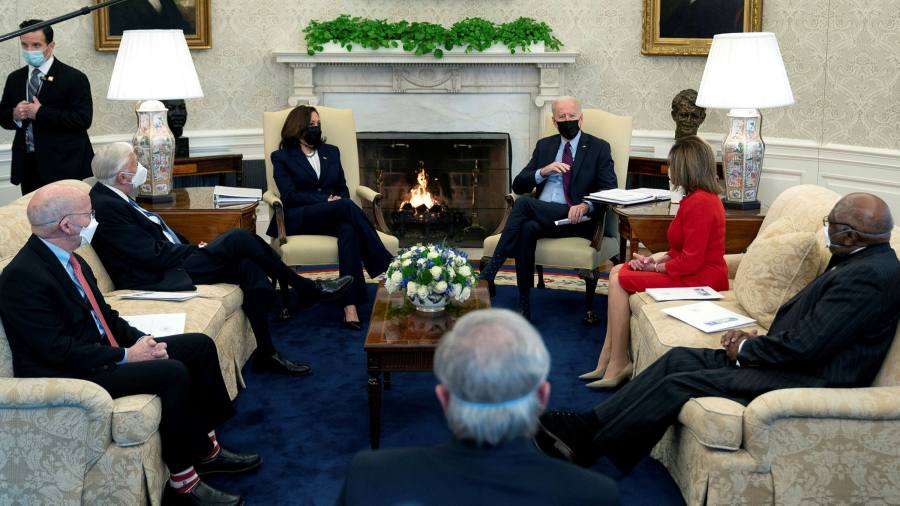 US president Joe Biden’s plan for $1.9tn in Covid-19 stimulus has come under attack for being too large. His team has responded by citing a lesson learnt after the 2008 crisis: go big while you can because there is no guarantee that there will be political support later for doing more.

But the financial crisis also teaches us another lesson. Rather than trying to tailor the response to one’s best guess of the precise size of today’s crisis, go big enough to buy insurance for economic recovery efforts with the recognition that things might go wrong and might already be worse than expected.

First, consider the information Barack Obama had when he was crafting his initial recovery plans. Official gross domestic product numbers showed that the US economy contracted by only minus 0.5 per cent in the third quarter of 2008. The January 2009 first look at fourth-quarter GDP showed the economy contracting at an annual pace of minus 3.8 per cent. Later data was to reveal the hole was much deeper. Third quarter GDP had actually fallen by 2.1 per cent and the fourth quarter saw GDP drop by a dramatic 8.4 per cent — twice as bad as initially projected and the worst quarterly drop in 50 years.

Second, that recession also showed the importance of having enough firepower to overcome unforeseen events. In December 2010, after Obama and then vice-president Biden and Congress added more stimulus relief, US Federal Reserve economists upped their growth forecasts for 2011 to 3.7 per cent and projected 4.4 per cent growth in 2012.

But two unforeseen external events and one self-inflicted wound in 2011 put paid to that optimism. The Arab spring — which began on December 17 2010 — led to a 30 per cent increase in petrol prices, slowing the economy and denting consumer confidence. The March 2011 earthquake, tsunami, and resulting Fukushima nuclear meltdown ended up having a far larger than expected impact on global supply chains. US auto production was particularly hurt, declining in both the second and third quarters of 2011.

Making matters worse, in July 2011, Republican congressional leaders refused to increase the “debt ceiling”, which limits total US debt, as they tried to force Obama to make painful budget cuts. This created a global scare that the US was on the brink of defaulting for the first time in history. Consumer confidence ended up declining for eight straight months from February to September. In the end, the first and third quarters of 2011 had negative growth, and total GDP growth for the year was just 1.6 per cent.

There are clear parallels today. Just as 2008 GDP figures underestimated the economic hole Obama inherited, so today’s official US unemployment rate of 6.3 per cent probably undercounts the true labour market pain. Taking into account misclassifications and declining workforce participation, Harvard’s Jason Furman estimates that the realistic unemployment rate is 8.3 per cent, while Heidi Shierholz of the Economic Policy Institute argues for 11 per cent.

Fed governor Lael Brainard says their data reveals the bottom 25 per cent of workers are facing unemployment rates of 20 per cent, similar to the Depression. The last two dismal job reports further raise the spectre that with hindsight we will recognise that the debate over the Biden economic rescue plan should have been assuming an 8-10 per cent unemployment rate.

The US cannot always justify going “big” just to buy insurance against the unexpected. Yet what is unique about this moment is the combination of how high the benefit is of taking out such economic recovery insurance with how inexpensive it would be to purchase.

When dealing with a deeply wounded labour market, the costs of underestimating the hole or getting hit by unexpected negative events are particularly brutal. Long-term unemployment, scarring of young people entering a weak jobs market, and evictions and foreclosures have exceptionally high costs to dignity and long-term economic potential.

At the same time, negative real interest rates mean the cost of financing recovery insurance has never been cheaper. Even after adding more than $2tn in new borrowing in 2020, the US government’s projected net interest payments for 2020-2025 fell by a third to 1.2 per cent of GDP. It should be clear that the risks of taking out too little recovery insurance far outweigh the risks of taking out too much.