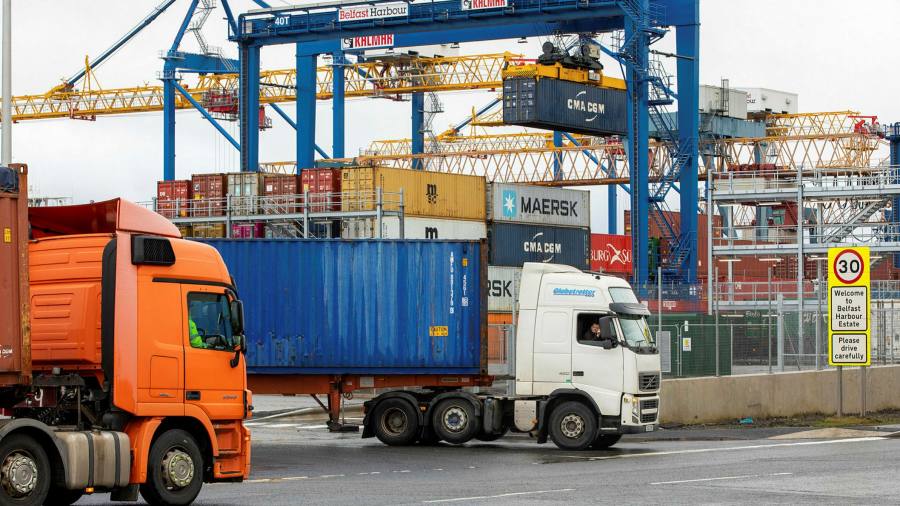 The EU is in danger of putting its “integrationist theology” above the interests of the people of Northern Ireland and must be more “pragmatic” in its application of the post-Brexit arrangements for the region, Cabinet Office minister Michael Gove warned on Monday.

Speaking ahead of a key meeting with his European Commission counterpart Maros Sefcovic in London on Thursday, Gove said Brussels urgently needed to “reset” its approach to the Northern Irish protocol — the part of Britain’s 2019 Brexit treaty designed to avoid a hard border on the island of Ireland.

Last week Gove wrote to the EU demanding the bloc extend a series of grace periods on bureaucratic controls on goods travelling from Great Britain to Northern Ireland, but signalled the two sides remained far apart on key issues.

“Progress has been made but we are very far from resolving those problems,” he told a committee of MPs.

Gove warned that “the cause of peace or progress in Northern Ireland” would not be served if Brussels did not show more flexibility over the border by prioritising what he called the bloc’s “integrationist theology”.

Under the terms of the protocol, all goods flowing into Northern Ireland from Great Britain must conform to strict EU customs rules, effectively creating a trade border down the Irish Sea that has caused political and economic tensions since January 1.

UK supermarkets have already warned they need more time to adjust, while Gove has demanded that rules governing the sale of plant products, the movement of pets and guide dogs and the export of meats, such as sausages, should be relaxed to maintain stability in Ireland.

“It does not threaten the integrity of the EU single market to have bulbs ordered from a wholesaler in Scotland or England which will then be planted in a garden in Belfast or Ballymena. We need to be pragmatic and practical about this,” he said.

The strong language from Gove came after the EU last week pushed back on British demands for a reset triggered after Brussels threatened to suspend the protocol in order to enforce controls on Covid-19 vaccine exports — a move that Brussels swiftly corrected after it caused outrage in London, Dublin and on both sides of Northern Ireland’s historical sectarian divide.

Gove said that even after being corrected, the EU’s move — which came without prior notification as required by the deal — had opened a “Pandora’s box” and eroded trust between all sides.

On the question of post-Brexit disruption at Channel crossing points, MPs on the European scrutiny committee were told that the trade agreement signed by the UK and EU on Christmas Eve was proceeding relatively smoothly, with Gove’s officials saying that trade flows had “held up exceptionally well” since it came into force on January 1.

Gove rejected widely reported claims from the Road Haulage Association that loads had fallen by 68 per cent since January 1, saying that the government did not recognise the figure, which he called “erroneous” and “based on a partial survey”.

Rod McKenzie, the RHA’s director of policy, said the group stood by the claims which he said were based on surveys of members comparing year-on-year data, and estimated that 60 per cent of trucks were returning to the EU empty from the UK.

“We at the RHA simply don’t recognise the government’s terribly optimistic, and in our view conflated, figures. There’s a lot of spin going on here,” he said.

The government’s assurances on trade flows came as job losses hit the UK’s biggest lobster port, with a senior Conservative MP calling on ministers to hold daily talks with Brussels to smooth the flow of seafood exports.

Sir Greg Knight, MP for East Yorkshire, spoke to the FT after family-owned Baron Shellfish in the port of Bridlington shut because of the rising costs and paperwork of shipping live lobsters to the EU.

“It needs to be addressed urgently. We could get other small businesses closing and I want to know what ministers are doing about it,” Knight said.

Sam Baron, the owner, announced he was closing the company after 40 years in business because it relied on selling direct to customers in the EU. “With deep sadness . . . I’ve had to let my business head overrule my heart,” he posted on Facebook.