The prospect of Mario Draghi, former president of the European Central Bank, taking the helm of Italy’s government has sent a key measure of political risk on the continent to its lowest point in five years.

The additional yield demanded on 10-year Italian debt over its ultra-safe German counterpart fell below 1 percentage point last week. It is down from more than 3 percentage points in late 2018, when a populist government in Rome was clashing with Brussels over budget rules.

Further reassurance to investors could come from the country’s share of the EU recovery fund. Italy is the largest gross beneficiary of the €750bn available, but it has not yet finalised a plan on how to spend the money.

“Draghi’s real advantage stems from his relationship with his EU peers and in being well qualified to draft Italy’s recovery plan,” said Nicola Nobile, chief Italian economist at Oxford Economics.

A Draghi-led government “could make a real impact by setting clear and credible goals for the plan and offering strong reassurances to the EU that this time the money will be used in a much more efficient way than in the past,” Nobile added.

Fixing Italy’s structural problems could prove harder. Even after a rebound next year, the European Commission expects Italy’s output per capita to be no higher than in 1998, weighed down by inefficient bureaucracy and poor investment. Valentina Romei 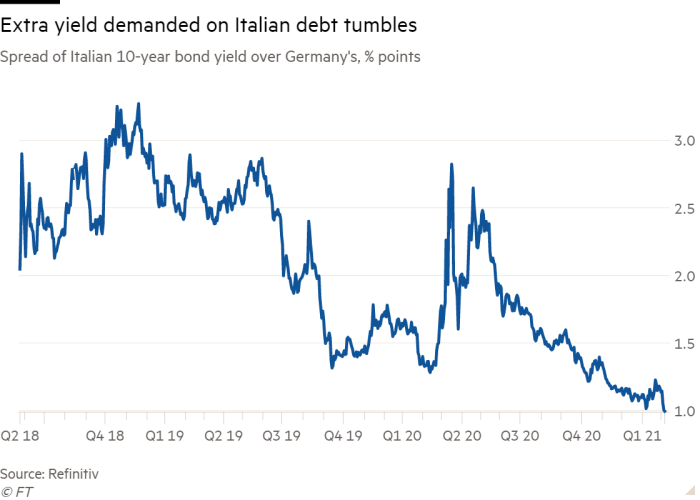 Is inflation making a return in the US?

The relentless surge in coronavirus cases in the US coupled with the reimposition of lockdown measures has weighed heavily on the country’s economic recovery. On Wednesday, investors will learn more about the extent of the damage when consumer price data for January is released.

Analysts predict a month-on-month increase of 0.4 per cent, the same level as December, with the year-on-year rate fractionally higher at 1.5 per cent, according to forecasts compiled by Bloomberg.

Many investors believe the pace of inflation will pick up later this year, as more people receive a Covid-19 jab and cities reopen, adding fuel to the economic recovery and feeding through to price rises. Morgan Stanley is pencilling in an economic expansion of 6.5 per cent this year, should President Joe Biden succeed in passing a $1tn-$1.5tn programme as early as March.

Encouragement from the Federal Reserve has also helped to push a key market measure of inflation expectations up to its highest level since 2018. The 10-year break-even rate hovered at 2.2 per cent last week after languishing around 1.6 per cent as recently as September.

Comments from Fed chairman Jay Powell at last month’s monetary policy meeting helped to further reassure investors that the central bank would look past any temporary bursts of inflationary pressures.

“Policymakers are intent on running a high-pressure economy,” wrote Chetan Ahya, global head of economics at Morgan Stanley, in a recent note. “Even with stronger growth on the back of expanded fiscal stimulus, we do not expect a tapering of Fed asset purchases before early 2022, and see no actual policy tightening before 2023.” Colby Smith

How strong is China’s economic recovery?

China’s inflation reading for January, out on Wednesday, is expected to show the country’s consumer price index turning negative for the second time in three months.

Economists polled by Bloomberg predict a drop of 0.1 per cent year-on-year, compared with a rise of 0.2 per cent in December.

Sluggish prices have come despite a rapid recovery from the coronavirus pandemic, suggesting consumer demand is yet to fully bounce back.

Inflation has also been weighed down by pork prices — a key component in the nation’s basket of goods — after they rose sharply last year due to African swine fever.

CPI in China fell into negative territory in November for the first time in more than a decade, registering a rate of minus 0.5 per cent. Core inflation, which excludes food and energy, has remained positive but readings have stayed close to decade-lows.

Economists also expect January’s producer price index, a measure of factory gate prices, to return to positive territory on Wednesday. The gauge has been negative in every month since January last year but is expected to rise 0.3 per cent year-on-year.

Inflation data will also provide clues as to the trajectory of monetary policy in China. The country’s central bank lowered key lending rates last year in the midst of the pandemic, but did not go on to ease policy as much as its US counterpart. Thomas Hale