We’d like to draw your attention to two articles that have recently graced FT.com. Here’s the first, from the FT’s German industry correspondent Joe Miller, which appeared online earlier today:

German carmakers are considering building up semiconductor stockpiles to prevent a repeat of the crippling chip shortages that brought assembly lines to a standstill and stalled the production of hundreds of thousands of vehicles worldwide.

The move could prompt an overhaul of the industry’s finely tuned “just-in-time” supply chain, which has been used for decades and relies on daily deliveries to preserve cash. The system also allows for last-minute bidding wars between parts makers.

The second, from Patrick McGee in San Francisco, published yesterday:

Peloton pledged it would spend $100m on air freight and expedited ocean freight to improve its “longer than acceptable wait times” over the next six months. “While this investment will dampen our near-term profitability, improving our member experience is our first priority,” Peloton told shareholders.

That follows news that the exercise bike maker has bought Precor, one of the world’s biggest fitness equipment makers, for $420m. Precor has a plant in North Carolina, easing the burden of shipping the product to customers in the US.

We can see why in the throes of a pandemic automakers, many of whom had to respond to chip shortages by halting production, want to build up inventories. It also makes sense that makers of expensive fitness products which time may yet prove to be a fad are keen to get as many bikes to customers as possible while people are still spending most of their time at home.

But it’ll cost them.

Transporting goods by container was one of the most dramatic shapers of globalisation because it let businesses and consumers in North America and Europe benefit from far cheaper labour and production costs in other parts of the world. The development of the world’s major shipping routes, from East Asia to Europe, and from East Asia to the US, in turn enabled the rise in just in time. Reversing that won’t come cheap.

Producer prices are already surging as this chart, compiled from a survey of purchasing managers across the eurozone, shows: 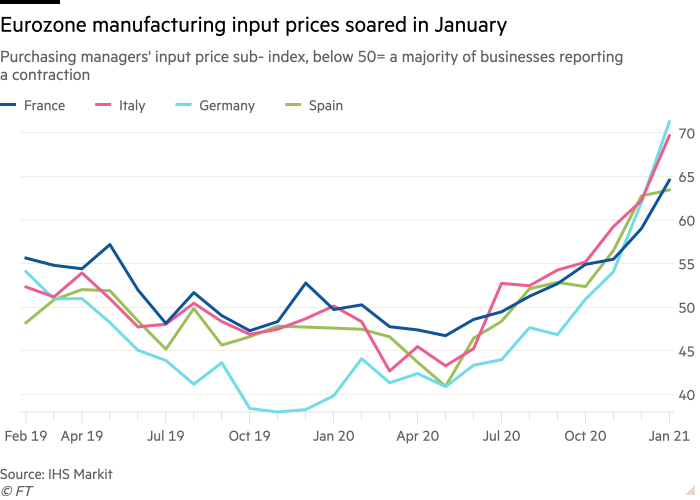 A big reason for this surge is the sharp recovery in global trade, which has generated logjams due to delays associated with sending goods to manufacturers and customers. It has also led to higher shipping costs:

Freight rates would, of course, be far less of a factor if manufacturing was moved closer to home. But any saving from transportation is not going to compensate for costs from reshoring and the price of building up inventories (at least in the short-term). If automakers do act and more companies follow Peloton’s lead and reshore, then we’re going to see a lot of inflation emerge in the supply chain.

Parts shortages and transport logjams might also be far less of an issue once lockdowns ease and people can spend more of their income on services and less on consumer durables. As Valentina Romei points out here, there is little data to suggest that, for all the talk of it, much reshoring has actually happened yet.

Even if it does happen, we are somewhat sceptical that this pressure on producer prices will feed through into broader inflation. The reason being that, once economies reopen, government will also remove a lot of the support that has been propping up businesses. Once that support is removed, we’d expect to see a rise in unemployment. As unemployment rises, demand falls, keeping a lid on the degree to which this higher costs can be passed on to consumers.

Think otherwise? Enlighten us in the usual place please.