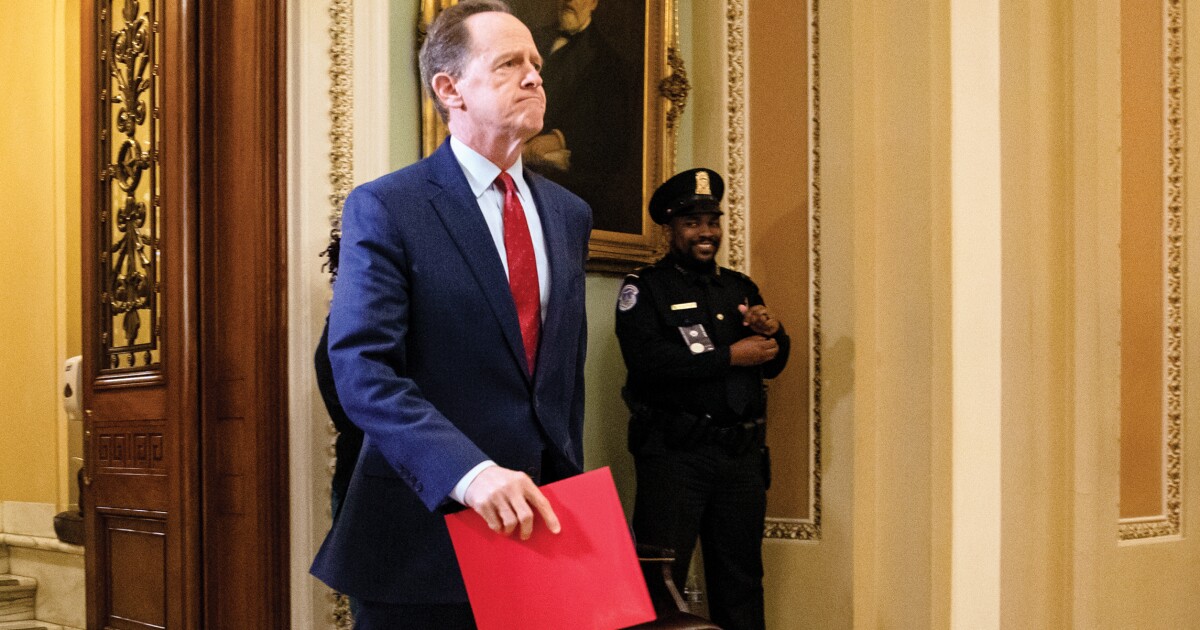 When Pat Toomey was elected to represent Pennsylvania in the Senate in 2010, he hoped to rein in the federal government’s runaway spending and looming budget crisis. Roughly $14 trillion more in debt later, suffice it to say that these hopes didn’t materialize. Now, after announcing he plans to retire in 2022, the senator worries that he will leave behind a federal government on a “very bleak” financial trajectory. In an interview with the Washington Examiner, he explained why the current pandemic crisis could be followed by a fiscal disaster.

The first COVID-19 relief package was indeed “unprecedented and massive,” Toomey said, but he argues it was necessary. “The government closed down the economy to a very large degree, so we didn’t have much choice but to replace the lost income. And I think it would have been absolutely catastrophic had we not done so.”

Yet with the national debt at $27.8 trillion (and counting), roughly $222,000 per federal taxpayer, it’s clear that our country’s fiscal woes long predate the COVID-19 crisis. Nonetheless, the train remains headed toward broken tracks.

“The fundamental drivers of our fiscal imbalance remain … the big entitlement programs,” he said, referring to programs such as Social Security and Medicare. Both programs are set to reach insolvency within 15 years.

“And we’ve done nothing to put them on a better footing,” Toomey lamented. “Nothing at all. So, the medium-term outlook is very worrisome.”

Of course, it has become tragically fashionable for people across the political spectrum to dismiss budget deficits and runaway debt as inconsequential or an afterthought. On the Left, we’ve witnessed the rise of so-called modern monetary theory, which suggests deficits don’t matter at all. Toomey insists this is a grave mistake.

Because, he said, people understand that “at some point, you completely debase the currency and you have an economic catastrophe.”

But these arguments are all secondary to what Toomey identifies as the gravest threat: the ticking time bomb of record-low interest rates, which will return to historical norms.

Thanks to the Federal Reserve’s tinkering, interest rates have artificially hovered around zero for years now. Yet from 1960 to 2007, for example, rates were frequently above 5%, often exceeding 10%. In 1980, rates peaked near an astounding 20%. Toomey warns that the moment interest rates even get close to historic levels, the economy will be in trouble.

“If interest rates ever normalize — and there’s a lot of reason to think they will someday — then this mountain of debt becomes extremely expensive to service,” Toomey said. “Right now, interest rates are being kept, artificially, extremely low by the Federal Reserve. And so, the cost of debt service on this massive amount of debt is still actually quite low.”

But if inflation kicks up, which the senator thinks will happen, the Federal Reserve will have no choice but to allow interest rates to rise. That’s when the real trouble starts.

“Look at it this way: Our debt is now over 100% of our entire annual economic output,” he explained. “If interest rates for an extended period of time just went back to an average of 5%, and they’ve been much more than that for much of my adult life,” then the “interest on our debt alone [would be] 5 percentage points of GDP,” Toomey warned. Taxpayers would need to pay trillions more just to cover the interest on the debt, which would amount to “about a quarter of the entire annual federal budget. That’s hugely problematic. And it will mean massive tax increases, spending cuts, or a spiral of inflation.”

Of course, Toomey doesn’t deny that the GOP has largely failed to address this looming problem, despite all its fiscally conservative promises. He admits that the Republicans’ failure to rein in spending or entitlement programs while in unified control of the federal government from 2017 to 2019 “diminishes their credibility.”

“Several years of not having any interest in this issue does diminish people’s perception of your commitment to it,” Toomey said. “But, you know, better late than never.”

Toomey maintains that the GOP can still get serious about the issue.

“I think most rank-and-file Republican voters realize that we’ve got to contend with this unsustainable fiscal situation,” he said. “Most Republican members of Congress still realize that we do eventually have to deal with this. But it’s human nature to procrastinate and put off a painful, distasteful task as long as you can. If interest rates start to normalize, [that will] put a tremendous amount of pressure on us to do something meaningful.”

Part of the problem, Toomey admits, was Donald Trump.

“President Trump made it clear he was not going to touch the entitlement programs,” Toomey said with a sigh. “And so, it certainly wasn’t going to happen. This doesn’t happen without presidential leadership. It was kind of a free pass for members of Congress to say, ‘OK, we can’t get this done.’”

Of course, Democrats are an even bigger roadblock to fiscal reform, in the senator’s estimation. He said that when he first entered the House in 1999, many more Democrats “acknowledged at some level that there was a problem, that it needed to be addressed. We spent most of our time arguing about how to fix the problem.”

“The Democrats want no part of this problem,” Toomey said. “They’ve invented this crazy, radical notion that there’s no limit to how much money you can print and spend. Republicans will have to bear all of the political responsibility [of fixing the nation’s fiscal woes].”

Of course, whether Republicans will actually take on that political responsibility in the coming years remains to be seen. A growing faction of populist Republicans, perhaps best embodied by the likes of Missouri Sen. Josh Hawley and Fox News’s Tucker Carlson, increasingly eschews the principles of strict budgeting.

Toomey acknowledges the existence of this growing wing but doesn’t consider it a death knell for a return to fiscal conservatism.

“I think that is still a distinctly minority view among Republican voters as well as Republican elected officials,” he offered. The senator takes issue with the narrative that the GOP must embrace big-government economics or populist policies to make inroads with minority voters or new Trump Republicans. Why?

“Well, if you just go back to literally one year ago, February of last year, the economy was doing incredibly well,” Toomey explained. “People were doing really, really well. Unemployment was at record lows, wage gains were growing and accelerating the most for the lowest-income workers. There were more job openings than there were people looking for work. And there was a broad recognition that, you know what? This is really good.”

Toomey argues that what got us there was perfectly in line with fiscal orthodoxy: being “pro-growth, tax reform, supply-side economics, and reducing regulation.” Indeed, the senator cited the GOP’s 2017 tax law, which cut business and personal income taxes — legislation he played a crucial role in crafting — as one of the prime achievements of his political career.

Still, the issue of trade policy does stand out as one in which, at least under Trump, traditional party lines were scrambled. But Toomey views Trump’s trade disruption as more of an aberration than a revolution.

“There’s no question the economy would have been stronger without [Trump’s] tariffs,” he said. “This [has been] quantified many times by many researchers, many economists.”

“Now, fortunately, while they got a lot of publicity and attention, in the grand scheme of things, the total amount of tariffs were still quite low,” Toomey continued. “And we still have a very, very robust free trade environment. So, the damage the Trump tariffs did was modest in scale.”

“There’s still a Republican consensus for economic freedom, and free trade is just a form of economic freedom,” he argued. “The idea that the federal government should tax you if you choose to buy a product from overseas is very contrary to not only economic theory about what gets you the best outcomes but also just fundamental freedom. Why shouldn’t you be free to decide who provides the best product and service for you?”

The senator hopes Republicans will reconnect with their fiscally conservative bona fides soon, as Democrats begin at least two years of unified control of the federal government.

“I’m very worried that they’re gonna do a lot of economic damage,” he said, citing tax hikes, job-killing regulations, and large expansions of the welfare state. So, too, is there a “very high risk” that Democrats will attempt to use the COVID-19 crisis to make “emergency” welfare programs permanent and take the United States closer to a democratic-socialist welfare state, the senator said.

“What a ridiculous and terrible idea,” Toomey continued. “Throughout the entire long history of unemployment programs … we never thought it was a good idea to pay them more not to work than they can make working. It’s too ridiculous to have [even] occurred to anyone. And then we did it. And then we did it again. And now, Joe Biden wants to do more of it.”

“Let’s be clear — a big part of what [Biden’s COVID-19 legislation] is all about is making their liberal wish list permanent policy,” the senator surmised. Indeed, it’s hard to conclude anything else from the Democrats’ push to spend trillions more, hike taxes, force through a federal $15 minimum wage in the name of pandemic relief, and eliminate jobs at every turn with environmental regulations.

Toomey still has nearly two years left in office to build up the GOP’s defenses. And he’s undecided on what comes next. The question for the Republican Party and for the future of public finances is, what will follow Toomey in Congress?