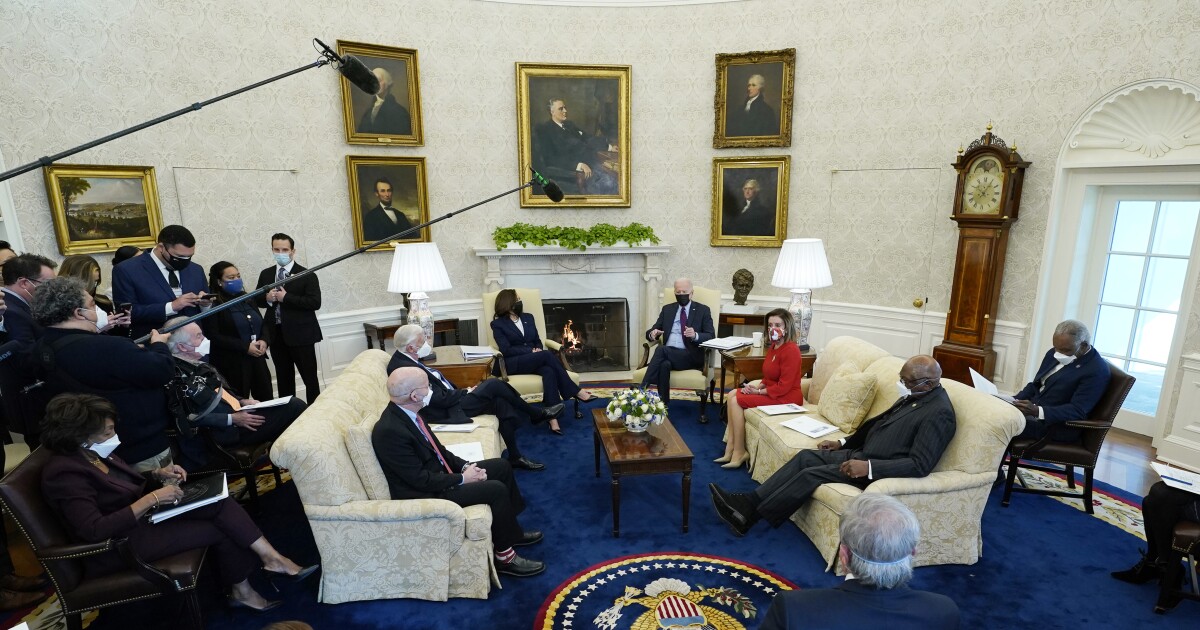 President Biden on Friday warned a still-sputtering economy is hampering a full jobs recovery, using his bleak assessment to continue pressuring Republican and Democrats alike to strike a deal on the details of his proposed $1.9 trillion coronavirus relief package.

“We’re going to be talking about the recovery package, but you saw the jobs report. Only 6,000 private-sector jobs have been created,” Biden told reporters in the Oval Office as he convened with Democratic House leaders and Vice President Kamala Harris. “At that rate, it’s going to take 10 years before we get to full employment.”

“That’s not hyperbole. That’s a fact,” he added. “We’re going to be in a situation where it takes a long, long time.”

The United States last came closest to the president’s goal of “full employment” in January 2020, when the unemployment rate stood at 3.5%, according to the Bureau of Labor Statistics. It soon began to climb severely as the COVID-19 pandemic spread across the country, hitting a peak of 14.8% in April 2020. The bureau’s latest numbers, from January, put the national unemployment rate at 6.3%.

House Speaker Nancy Pelosi recommitted to the current package and pledged a second while speaking to reporters after the two-hour meeting.

“This is the American Rescue Plan,” she said. “The next bill will be the recovery plan.”

Biden pointed to his experience as vice president when he helped shepherd an economic package through Congress as the country dealt with the 2008-2009 “Great Recession” that began under the George W. Bush administration.

He said it was “hard as hell” to secure the votes needed for the 2009 Recovery Act under former President Barack Obama, and he used that administration’s experience to say Washington should have learned a lesson from those negotiations.

Pelosi said the group “didn’t talk about Larry Summers,” who in a Washington Post opinion piece on Friday argued that Biden’s proposal could be too big.

According to Politico, Summers’s article drew scrutiny from the White House after he cautioned that Biden’s bill risked sparking “inflationary pressures of a kind we have not seen in a generation.”

Biden economic adviser Jared Bernstein told CNN that Summers was “wrong in a pretty profound way.” Both advised the Obama administration during the last economic recovery, with Summers leading the National Economic Council between 2009 and 2010 and Bernstein as chief economist and economic adviser to Biden, who was then the vice president.

“We have consistently said the risks of going too small are much greater than the risks of doing too much,” Bernstein said. “Now, that doesn’t mean there are no risks engaged in the work we are doing … but what Larry is worried about here is inflation overheating, and right now, we have inflation that’s been below of the Fed’s target rate of 2% for well over a decade.”

“Where Larry got something importantly wrong, by the way, is suggesting that the administration was being dismissive of any potential inflationary pressure — that’s flat-out wrong,” he added.

Austan Goolsbee, Council of Economic Advisers chairman under Obama, told the Washington Examiner that Summers’s argument over current estimates of the economy’s output shortfall was “not the right way to” to assess the bill.

“I think that relief money during a catastrophe is critically important to prevent permanent damage, and it’s not the right way to think of it to compare it to the current output gap,” he said. “That’s a stimulus argument. This isn’t stimulus.”

The president has been negotiating his $1.9 trillion “American Rescue Plan,” meeting this week with Republicans and Democrats at the White House. Aides say he has also been working the phones as the White House and Democratic leaders reportedly want a bill on his desk by the end of February.

[Read more: GOP uses COVID talks to paint Biden as ‘puppet’ of Pelosi, Schumer — and his own staff]