In a letter to the Kentucky senator, the animal rights group credited him for prompting those who experiment on animals to reveal details of their secretive world. 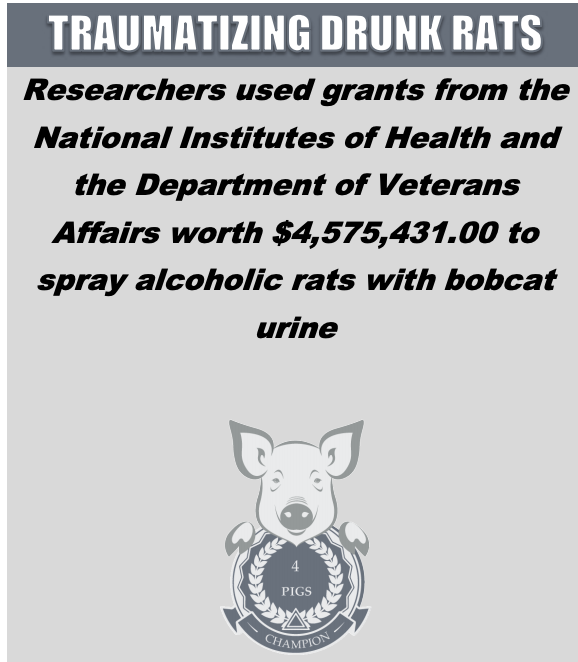 “We urge you to keep telling it like it is and do all you can to redirect funds from studies to superior animal-free methods,” wrote PETA Senior Vice President Kathy Guillermo in the letter shared with Secrets.

At issue is Paul’s annual report on government waste that he titles “Festivus,” named after the fake Seinfeld holiday of the “airing of grievances.”

His latest report mentioned that “researchers used grants from the National Institutes of Health and the Department of Veterans Affairs worth $4,575,431.00 to spray alcoholic rats with bobcat urine.”

That led somebody PETA identified as a Louisiana State University professor to tweet that Paul was “incorrectly” describing his work as “spraying alcoholic rats with bobcat piss.”

He then challenged others in the field to tweet how they think Paul would describe their work. Answers included “shocks lady rats until they run away” and “mice running on a homemade Peloton chasing imaginary cocaine.”

PETA called it a “rare and self-revelatory glimpse into a very secretive world.”

The group that helped Paul draw up his report also gave credit to the senator for calling out abuses in animal testing.

Mackie Burr, director of digital and grassroots development at 3-million-member taxpayer watchdog group White Coat Waste Project said, “Whether it’s putting tiny lizards on treadmills, stressing out mice to turn their hair gray, or spraying drunk rats with bobcat urine to traumatize them, Senator Rand Paul’s Festivus Report provides a roadmap of reckless spending that belongs on the chopping block. Sen. Paul’s annual catalog of absurd appropriations is one of the best ways taxpayers can learn about egregious government waste that’s ballooned the national debt to a historic $27 trillion. We’re proud to count Sen. Paul as a past recipient of our Waste Warrior award and grateful for his leadership on the COST Act to put a public price tag on all taxpayer-funded projects.”