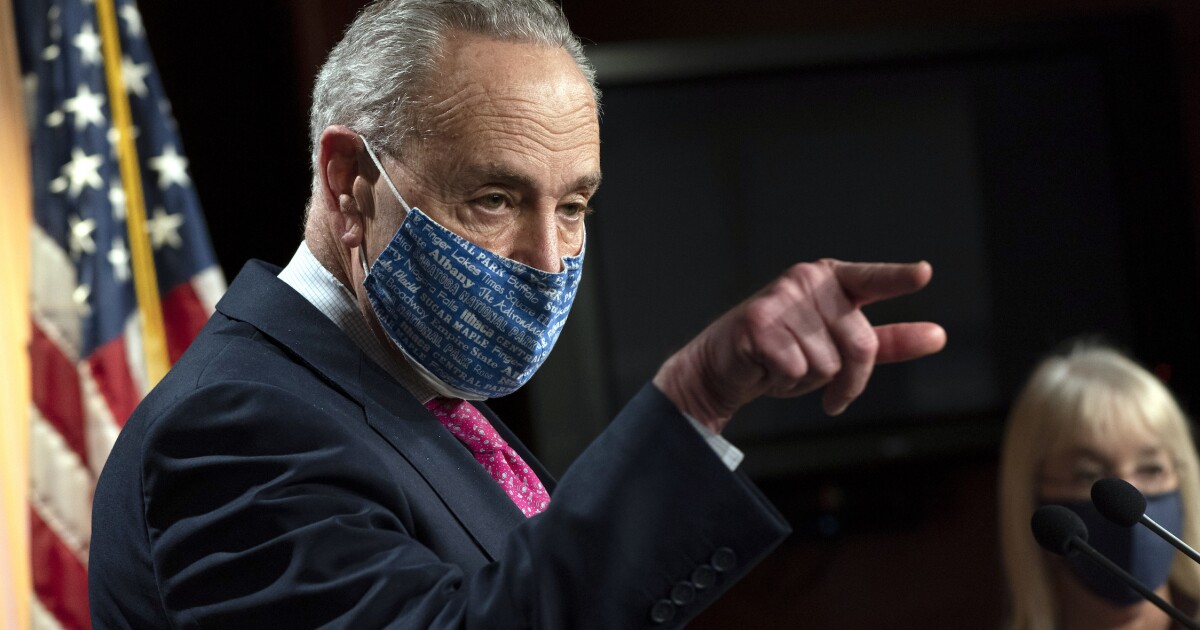 Senate Democrats, lacking the votes to end the filibuster unilaterally, plan to plow ahead with a “bold” agenda, including an increase in the minimum wage, through a budgetary rule that allows some legislation to pass with only 51 votes.

Senate Majority Leader Chuck Schumer told reporters Tuesday he’ll move quickly to pass a budget resolution in the Senate, which paves the way for lawmakers to pass certain bills with 51 votes instead of 60.

A major COVID-19 aid spending bill and an increase in the minimum wage to $15 are among the bills that could become candidates for passage under budget reconciliation.

The tactic allows bills to pass the Senate if they affect federal revenue. While coronavirus spending falls under that category, a minimum wage increase would not necessarily conform to the rules governing reconciliation. But Democrats plan to find a way.

“I think there is a consensus,” Senate Budget Committee Chairman Bernie Sanders, a Vermont independent and socialist, told reporters. “If Republicans are not prepared to come on board, that’s fine. We’re not going to wait. We’re going forward soon and aggressively.”

Sanders said his plan is to include a budget resolution that covers COVID-19 aid, raising the minimum wage, and “much more.”

Democrats are pivoting to reconciliation now that several centrists in their party have declared they will oppose a vote to eliminate the long-standing filibuster.

At least five Democrats either oppose eliminating the filibuster or are undecided. In recent days, Sens. Joe Manchin of West Virginia and Kyrsten Sinema of Arizona repeated their pledge to uphold the filibuster.

That leaves Democrats short of the 51 votes they would need to eliminate the 60-vote requirement unilaterally.

Democrats control a bare majority with 50 seats and the tie-breaking vote of Vice President Kamala Harris.

Democrats have not given up on possibly ending the 60-vote rule in the future. But for now, they are eager to get some of their agenda signed into law, and reconciliation is the fastest way to accomplish it.

Schumer said he’s still looking for a bipartisan agreement on a coronavirus aid bill but is getting ready to circumvent Republican opposition by using the reconciliation process and quickly.

“The first step to pursuing COVID relief legislation through reconciliation would be to pass a budget resolution,” Schumer said. “And so, in keeping our options open on our caucus call today, I informed senators to be prepared, that a vote on a budget resolution could come as early as next week.”

He told reporters, “Our No. 1 goal, we have to get big, bold things done.”

Republicans oppose the cost and size of President Biden’s $1.9 trillion COVID-19 aid proposal. The GOP wants the measure to focus on providing money for vaccine production and distribution. Some are open to a new round of stimulus checks aimed at lower-income individuals and families.

Biden said he is hoping to negotiate a bipartisan deal.

Sen. Mark Warner, a Virginia Democrat, said the two sides “are going to keep having those conversations” to try to strike a deal.

The Biden plan includes the $15 minimum wage provisions. Warner said he backs a different plan that would phase in the increase gradually over four years.

“We need a backup plan, a security blanket, an insurance policy, because we need to move this quickly,” Van Hollen said.